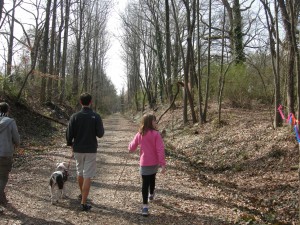 Federal funding for the Atlanta BeltLine’s southwest trail is at risk if Atlanta doesn’t acquire the right-of-way by June 30. File/credit: Maria Saporta

The Southwest Corridor Trail is to be built with an $18 million TIGER V grant. Atlanta has until June 30 to acquire rights of way and complete other pre-construction activities, according to terms of the grant.

The Atlanta City Council, at its Monday meeting, is slated to authorize Mayor Kasim Reed to acquire land needed for the southwest trail. The legislation provides for purchase or condemnation. The paper, 14-O-1145, does not specify the amount of land involved.

Incidentally, the political stakes are high for Reed on this particular trail.

The mayor said at a Nov. 20 meeting of the Northwest Community Alliance the southwest trail proves that Atlanta is developing the BeltLine in an equitable fashion, and not just in prosperous neighborhoods in northeast Atlanta. This aspect of equitable development will promote the level of citywide support needed to convince investors to provide up to $4 billion to build the BeltLine as a public-private partnership, Reed said.

The U.S. Department of Transportation has required the June 30 deadline in all its TIGER V grants. The purpose is to provide DOT with “reasonable assurance” the grant funds can be obligated by Sept. 30, according to terms of the grant. 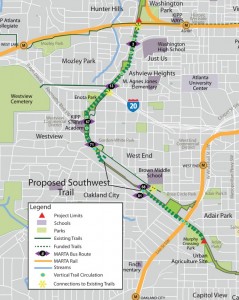 Map of the Southwest Corridor Trail of the Atlanta BeltLine

Funds not obligated by Sept. 30 – the last day of the federal fiscal year – will expire, terms state.

This isn’t the first time Atlanta has scrambled with this grant, despite clear warnings from the DOT.

The department has advised since at least April 2013 of the expedited deadlines associated with this particular grant. The federal notice of funding availability states:

Although Atlanta was awarded the money Sept. 9, 2013, the council didn’t take any action to authorize the mayor to accept the money until Dec. 2 – the last meeting of 2013.

The council voted on that day only because outgoing Councilmember Aaron Watson filed the legislation that day, during a council meeting, and asked for immediate passage. Most legislation is considered by one or more committees before the council acts, a process that can take several weeks.

Details of the proposed land acquisition are not available on the council’s website. The location of the land is said to be listed in “Exhibit A”, which is not included in the legislation available on line.

Such details were available online the first time the council voted to authorize the mayor to condemn property for the BeltLine if terms could not be reached with land owners. The council in June 2013 authorized the use of eminent domain to acquire land associated with the southwest trail and to expand Enota Park, one of the BeltLine park jewels.

That authorization to condemn land for the BeltLine stirred controversy over the concept of Atlanta exercising its power of eminent domain to take private property for a public project that is highly regarded for its lofty vision.

No debate is scheduled before the council is expected to approve the BeltLine property paper. The legislation is included in a block of bills that have been unanimously approved by one or more council committees.