Atlanta is on pace to have 2,000 sworn police officers this year. 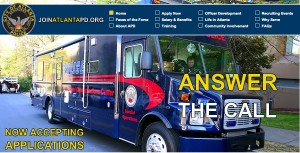 Atlanta now has 1,960 officers, counting 23 who were added after a police academy graduation Tuesday, according to police Chief George Turner. The recruits needed to reach the target are in the police academy or waiting to attend, Turner said. The money to pay the officers is in the budget proposal for the fiscal year that starts July 1, which Mayor Kasim Reed released Wednesday.

While the number of officers is important, the crime rate is the number that matters to those in the city. The rate of serious crimes is 2 percent higher than at this time last year, but is 18 percent lower than in 2009, the last year reported on the police department’s website.

Various mayors have held out the promise of 2,000 officers since Bill Campbell said it in 1997. The number has remained elusive, for any number of reasons. Mayor Kasim Reed made the promise and put a date on it: June 30, 2013.

Reed reiterated that promise in the letter he wrote to transmit his FY 2014 budget proposal to the Atlanta City Council. The second paragraph (the first is a greeting) reads:

The council will take Reed’s budget proposal as a starting point in budget deliberations this month. By ordinance, the council must adopt a budget in June. The fiscal year begins July 1.

Turner said the class graduated Tuesday night added 23 officers to the force, bringing it to 1,960 officers. An additional 120 recruits are either in the academy or waiting to attend the academy, Turner said. The academy lasts more than 20 weeks.

Councilperson Michael Julian Bond, who chairs the Public Safety Committee, said of having 2,000 officers in the department: “That will be a historic achievement, and highest compliments to the mayor for making that goal a reality. That was a few administrations ago [that the goal was stated].”

Meanwhile, the Atlanta Police Department’s web page provides crime statistics that are current, through April 27 as of today. They provide a snapshot of crime for the years going back to 2009.

Maps of the city posted on the page provide a close-up view of the crime picture – including the date, crime and location.

A catch-all of some other stats shows some interesting aspects of modern day life in Atlanta as the city continues its efforts to get more cops on the street: