Atlanta intends to generate solar power and sell it to Georgia Power through a planned public-private partnership with a Chicago-based energy firm.

The Atlanta City Council on Monday authorized Mayor Kasim Reed to enter negotiations with New Generation Power, Inc. Terms call for a 20-year ground lease with the solar company, and for the firm to deliver, install and maintain photovoltaic panels and related equipment. 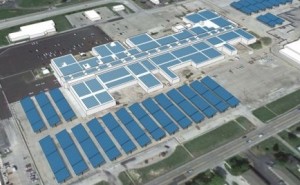 New Generation Power installed this solar array atop a former shopping mall that’s been converted into a data center, according to the company’s webpage. Credit: newgenpower.com

The city intends to lease land for solar farms at three landfills, which are closed, and at two sites at Atlanta’s airport, according to provisions in the legislation. The company is to pay all costs associated with the project, and its website says it has funds available through its shareholders, partners, and lending institutions.

Payments for the two airport parcels are to start at a total of about $426,000 a year and increase to about $682,000 a year at the end of the 20-year lease. Lease payments for the landfill sites are to be negotiated by the mayor. Terms of the contract provide for one renewal option of five years.

The solar farms are to be built at the following locations:

The two sites at the airport were part of the original request for proposals. Although they were not cited in the initial legislation, they were included in a substitute resolution approved by the council’s Finance Committee at its March 26 meeting. 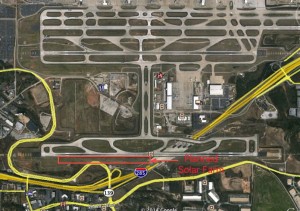 The planned solar farm at Atlanta’s airport is to be located on two parcels along the south side of the airport property. Credit: Google Earth, David Pendered

The solar program fits into Atlanta’s ongoing commitment to improve its sustainability. Another example of the effort is Atlanta’s Better Buildings Challenge, which is part of a federal initiative to improve the efficiency of buildings.

Atlanta’s solar farm program also fits into the plan by Georgia’s Public Service Commission to greatly expand the amount of solar energy produced in the state. The PSC has approved 735 megawatts through solar power arrays.

Terms of the newly approved Atlanta legislation call for New Generation Power to install equipment that can generate a minimum of 800 kW per project. The city expects that a total of 5 MW of solar power could be built on the five parcels, providing an estimated 7,000 MWh of electricity a year.

The objective of the program, according to the legislation, involves:

Only two companies were named on the final list of proponents, New Generation Power and Atlanta-based Green Life Energy Solutions, Inc. Further information about the proposals was not included in the legislation.

The company has five existing projects – three in the U.S., one in Brazil, and one Serbia, according to the website.

Proceeds of the ground leases are to be provided to an array of city accounts, including solid waste and the airport.