Atlanta ups ante against blight: Jail inmates to board up vacant buildings

Atlanta is taking a small but potentially significant step to aid blighted neighborhoods. 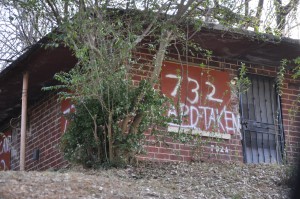 Atlanta has authorized the use of jail inmates to board up vacant properties, such as this one located west of the Georgia Dome, when the owner refuses to “clean and close” the structure. Photo taken in January. Credit: Donita Pendered

Inmates from the city jail will be deployed to board up buildings that are open and vacant, in cases where owners won’t secure them. The program aims to reduce the number of structures available to harbor vermin, disease, and criminals.

Blight has long been viewed as one of Atlanta’s major urban woes. A recent report commissioned by the city showed that 7,974 structures are vacant, or more than 6 percent of all buildings. Not even the $2.1 million Atlanta has allocated for demolition this fiscal year is expected to cover the need.

Atlanta previously ran a pilot program out of the Department of Corrections in which inmates provided the labor to board up vacant buildings. The inmates are brought in to fulfill the “clean and close” orders of the city’s In Rem Review Board. Property owners will be charged for the service.

The Atlanta City Council voted Nov. 17 to formally authorize the program, which Mayor Kasim Reed recommended in his proposed budget for the fiscal year that ends June 30, 2015. About 600 inmates a day are housed in Atlanta’s jail, according to the forecast for the previous fiscal year, which is the latest figure readily available.

Vacant properties in Atlanta are concentrated west and south of downtown. Click on the map for a larger image. Credit: “The Strategic Community Investment Report,” APD Solutions

O’Callaghan referenced a report this year by the Haas Institute, an affiliate of the University of California/Berkeley, that showed Atlanta and Las Vegas are tied for first place for the percentage of homes with negative equity.

Georgia ranks No. 1 in the country for having large numbers of ZIP codes with mortgages that are underwater, according to the report that listed the top three states in this category as: Georgia, 61; Florida, 55; Illinois, 47.

“We need innovation in this space,” O’Callaghan said. “The reality is budget dollars are limited…. Unless we can find a way to reduce costs, to stretch dollars, or to collect from violators, we’ll never have enough dollars to deal with the blight issues that have become so significant since 2006, 2007.”

The program might even provide work skills to inmates, who may be able to find jobs in the demolition industry, he said.

Statewide, blighted buildings are so endemic that the Georgia Municipal Association intends to seek legislation from the General Assembly to address at least one facet, said Amy Henderson, GMA’s communications director.

GMA will support a proposal to require banks to file a deed so there is an owner of record following foreclosure, Henderson said. Currently, a structure can change hands a number of times without a deed being recorded, which impedes cities from compelling owners to secure vacant buildings.

“A lot of cities are dealing with blighted property as a fallout of the recession,” Henderson said. “Cities are trying to do what they can.”

The commission is to deliver recommendations to address blight after meeting for up to 12 months for the purpose of studying, “best practices to further combat habitual violators of the Atlanta Housing Code, both commercial and residential.”