Atlanta vendors could work before Christmas as Mayor Reed, AJC spar over Reed’s handling of issue

Atlanta’s street vendors could be back in business before the Christmas holiday season if the Atlanta City Council approves Monday the proposal submitted by Mayor Kasim Reed’s administration. 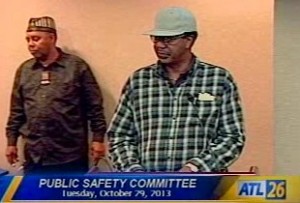 The council is expected to vote for the proposal that was passed Oct. 29 by the council’s Public Safety Committee, though the committee left the door open for any last-minute revisions to be made before the final vote. Vendors generally support the plan.

The politics of the vending issue now unfold in a very public debate between Reed and Kyle Wingfield, a columnist for The Atlanta Journal-Constitution. This back-and-forth arises even as Reed’s reelection campaign is promoting a brochure featuring positive comments about Reed published in the AJC. 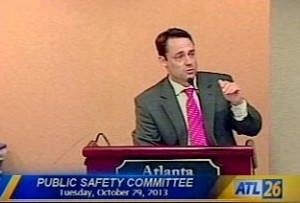 The full discussion is available on the city’s website and ajc.com.

Even before the first column appeared, Reed’s administration had submitted its vending proposal to the council. During the Oct. 21 council meeting, the proposal was submitted as a bare-bones, place-holder legislation introduced by councilmembers Keisha Lance Bottoms; C.T. Martin; and H. Lamar Willis.

The legislation literally was a shell. It contained nine “whereas” statements followed by four sections – sections one and two were blank; section three said the new ordinance, “shall read as follows;” and section four said the ordinance shall become effective immediately upon its approval.”

That language sufficed to get the ordinance assigned to the council’s Public Safety Committee, where it was discussed for well over an hour on Oct. 29.

At the end of the committee meeting, the few vendors in the audience were in general support of the administration’s proposal.

Marco Gray, a vendor at Barbara Asher Square, said he supports the measure and hopes the council will approve it Monday. That timing would enable vendors to prepare for New Years Eve, which is a lucrative event, he said.

Larry Miller, a vendor who joined in a lawsuit that overturned the city’s previous vending program, said he supports the provisions of the proposed ordinance. But Miller asked the council to defer it until such a time that all vendors whose businesses were closed in March could reopen simultaneously.

Reed’s deputy chief operating officer, Hans Utz, presented the administration’s plan to the Public Safety Committee. At the end, Utz was commended by committee Chairman Michael Julian Bond, who has maintained pressure on the administration to propose a vending program:

The committee approved the proposal by a vote of 4-0-1. Bond abstained in order to allow the council to engage in further discussion at Monday’s meeting. 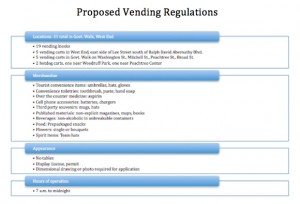 Click on the image to see a larger version of the vending legislation proposed by Mayor Kasim Reed’s administration. Credit: David Pendered