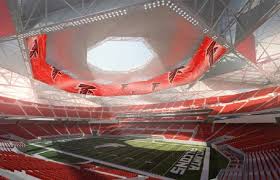 Atlanta is willing to pay an interest rate of up to 8 percent for the $278.3 million in revenue bonds it intends sell to provide construction financing for the new Falcons stadium. 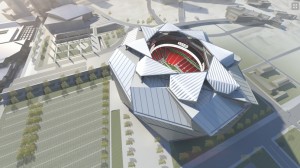 The retractable roof on the future Falcons stadium is specified in the bond validation petition. Credit: newstadium.atlantafalcons.com

To put that rate in perspective, Atlanta’s airport is paying rates ranging from 2 percent to 6 percent on its $3.1 billion in outstanding bonds, according to the airport’s 2013 Comprehensive Annual Financial Report. The airport bonds are paid with proceeds of airport revenues, passenger fees and federal grants.

These terms and others are cited in the bond validation petition that Fulton County Superior Court Judge Ural Granville is scheduled to hear Feb. 17. Opponents who think the stadium deal could do more than the current plan to transform nearby neighborhoods are expected to contest the bond validation.

The petition is a routine document that’s filed for all proposed government bond issuances. The purpose is to assure that all parties involved in the transaction have completed their assigned tasks. Fulton County District Attorney Paul Howard filed the document.

The petition confirms much of what has already been discussed about Atlanta’s participation in the stadium’s funding. Importantly, it confirms that Atlanta is pledging only the revenue from the city’s hotel motel tax to repay the bonds.

One component of the deal involves a topic that has spurred some discussion in regards to the Atlanta Braves plan to move to Cobb County. 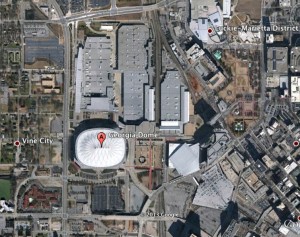 The Falcons stadium is to be served by surface parking lots and the Georgia Dome will be demolished, according to the bond validation petition. Credit: Google Earth

The petition states the Falcons have agreed to sign a “non-relocation” agreement with Atlanta’s development authority (Invest Atlanta), and the Georgia World Congress Center Authority. The Braves reportedly have not indicated they will enter such an agreement, which has raised questions about the commitment Liberty Media has in regards to owning the team and keeping it in metro Atlanta.

The Atlanta Falcons Stadium Co. LLC intends to sign an agreement that grants StadCo the right to license the use of the stadium for 30 years and options to renew up to three, five-year periods. The agreement requires the Falcons to play all home games in the new stadium, “with certain limited exceptions.”

The only source of funds pledged to repay the bonds is the city’s 8 percent hotel motel tax.

Terms call for 39.3 percent of the first 7 percent of the tax rate will be used to service the debt on the series 2014 bonds and related costs. Additional details about the remaining funds are not specified in the main petition, but may be specified in an attachment, No. 3, which was not immediately available.

Construction costs are “estimated to be in excess of $1.2 billion,” the petition states. The stadium’s price tag has been escalating over the past year and the figure of $1.2 billion is one that had been used during the discussion of the community benefit agreement.

The total amount the city intends to borrow is to provide $200 million in construction financing and some $78.3 million in interest and other costs.

The stadium-funding petition notes that Atlanta has created a community benefits agreement. This agreement was produced during a five-month period last year.

The agreement provides a framework for the spending of $15 million in city funds in three stadium neighborhoods – Vine City, English Avenue, and Castleberry Hill. The Arthur M. Blank Family Foundation has committed an additional $15 million to the same neighborhoods.

The series 2014 bonds can be used for four purposes, according to the petition: