By the time you finish reading this, the sun will have come out probably — and I’ll still be ticked off.

I’ve been swimming in a gusty fury since July 4th, when I slipped on these rain-soaked steps, hit my left hip, banged the left side of my head, smacked both shoulder blades and twisted my left ankle. My left palm (now deeply bruised) saved me from sliding all the way down. 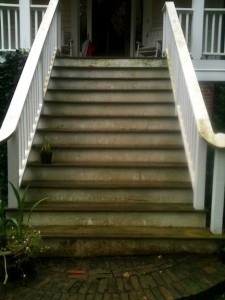 That broke open my rage about the crap weather in Atlanta. This time of year is supposed to be sunny and dry enough for parades, picnics and fireworks. My fury didn’t burst like a broken dam; the trickles have been building in my subconscious for weeks now, like water torture.

In June we had 9.5 inches of rain, the highest rainfall since 1996. The past 30 years, the average rainfall for June has been 3.95 inches. In a smallish ranch house with two teenaged daughters, a whiny dog and freelance deadlines, a couple of rainy days are doable. But after a month of rain, it’s the whining I can’t stand—especially the dog’s, and sometimes my own.

Even when the sun has peeked out, my surroundings are now soaked and stewed. My nearby woods is now a bug-infested, cobweb-covered, poison-ivy-emblazoned rainforest jungle. It’s a mucky, muggy trek to exercise the dog and me. Did I mention her whining?

Then there’s the lawn. It is a very bad omen when the mower repeatedly conks out in the front yard because the grass is too high. That means the back forty, in a flood plain next to Glen Creek, may be hiding bodies.

Even with a whole-house dehumidifier, our home feels wet all the time. I shake the empty bottle of anti-depressants and ponder how I ended up living in the Seattle of the South. Did I just see weird mushrooms popping up all over, or did I eat some too?

On Saturday, while driving to a 12-step meeting and feeling ready to let some people have it, I dialed up the National Weather Service. “I’m on the verge on a nervous breakdown,” I confessed.

Meteorologist Alex Gibbs was calm and reassuring. The current weather pattern is crazy—not me.

“We’re in a squeeze play between a low and a high,” he explained. “It’s producing an insanely high amount of water.”

I almost thought I heard him say “squeegee play.”

North Georgia has been sandwiched between high-pressure patterns in Arizona and Bermuda, resulting in an ongoing dousing of moisture from the Caribbean and the Yucatan. That relentless pattern gave us gullywashers over the July 4th holiday. 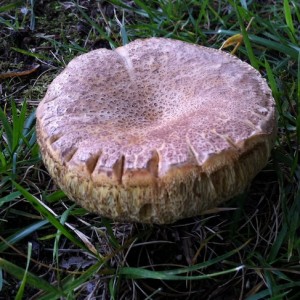 One of the weird mushrooms that has appeared during the recent monsoons.

Gibbs said the region actually reached a record last week in the amount of “precipitable water” collected in the atmosphere. Precipitable water is a measurement of a column of water vapor, if the vapor was collected and converted into liquid. The National Weather Service recorded 2 inches.

The low-pressure stall, Gibbs predicted, should already be starting to break up by the time this column gets published.

Not so fast. Gibbs pointed out that June was made wetter by delayed springtime storm systems that moved through the central U.S. and the Southeast. The outlook for the rest of the summer doesn’t look better, as hurricane season approaches.

The National Oceanic and Atmospheric Administration is predicting another active, maybe extremely active, season of hurricanes.

There goes summer. Breathe. Count to ten and pass the Zoloft.

Washing it down won’t be a problem.