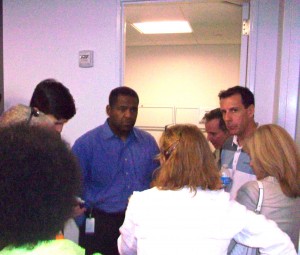 Mitchell’s action seems to bolster Atlanta’s bargaining position in the negotiations to have the stadium built on the south site – the location preferred by the city. The Falcons organization said July 30 it is focusing on the north site because the south site was not on track by Aug. 1 to be acquired from two churches.

Mitchell’s action makes it unlikely that Atlanta will be in a position to provide any of the $200 million anytime soon, and certainly not during the November timeframe that seemed possible just last month. It’s not clear when the Falcons need the money from Atlanta to continue with design and development.

Another aspect that was unclear is the extent of coordination, if any, between Mitchell and Mayor Kasim Reed’s administration concerning Mitchell’s parliamentary move to delay the city’s ability to provide the $200 million. The delay also forestalls any money the stadium neighborhoods could receive for upgrades, and that money was to begin flowing as soon as January, according to a schedule unveiled last month.

The events unfolded at Wednesday’s meeting of a committee that’s to negotiate terms for community benefits the city is to ensure to people who live near the stadium. The terms involve tangible benefits such as access to stadium construction jobs and game-day traffic control. The Atlanta City Council must approve the terms before Atlanta can sell $200 million in bonds and provide the money to the Falcons. The original schedule, unveiled in July, was for the council to vote on terms in October. Bonds could be validated by Fulton County Superior Court and sold rather quickly.

Reed’s deputy chief of staff, Katrina Taylor Parks, attended the meeting and said she had to push back on one of Mitchell’s points. Taylor Parks and Mitchell sparred briefly and then she withdrew.

“The original legislation said it could be the north or south site,” Taylor Parks said. “So I would push that as it relates to stakeholders because the council went out of its way, and so did the administration, to make sure all neighborhoods that were impacted were represented. As far as delaying the process, it’s the will of the body.”

Taylor Parks responded: “Having a facilitator makes sense. But the objective is to get resources to the community as soon as possible. As soon as tomorrow, we’ll see another impact as it relates to a game.”

A standing-room-only crowd packed into a room at Invest Atlanta’s offices to hear the plan for community benefits in regards to the Falcons stadium. Credit: David Pendered

The Falcons are to host the Cincinnati Bengals in a pre-season opener that begins at 8 p.m. ESPN is slated to broadcast the game.

Mitchell exercised his influence while presiding over the third meeting of the Community Benefits Plan Committee. Mitchell asked Ernestine Garey, COO of Invest Atlanta, which is involved with the negotiations, to explain an agenda that was packed for a 90-minute meeting.

Once Garey finished, Mitchell virtually tossed the agenda out the window. He said it was pointless to move forward when the stadium deal is in such a state of flux.

“I want to table any conversation about community benefits until we have a facilitator; know what the end work product will be – a community development plan, or community benefits agreement; and until we know who the stakeholders are going to be, based on where the stadium is going to end up.”

“With my legislative experience, I decided on the floor it was too risky to substitute agreement for plan because the motion would be subject to fail,” Bond said. “So I did the next best thing: There should be a plan, and there should be an agreement.

“In my opinion, as a representative and member of the community, and a lifelong resident of Vine City, that community needs a plan,” Bond said.

The community benefits committee did not vote audibly on the date of its next meeting before adjourning almost on time.