Atlanta’s development authority is slated to adopt a plan to create jobs and spur economic development at about the same time Atlantans begin considering whom to elect next year as mayor and to the Atlanta City Council.

Invest Atlanta has agreed to pay consultants $265,000 to devise and deliver a plan by December. Invest Atlanta is expected to consider adopting the plan at the end of the year, or in early 2013. City elections are set for November.

The consultants’ bill will be paid by Atlanta Housing Authority, Georgia Power, Central Atlanta Progress, and Invest Atlanta. Mayor Kasim Reed serves as chairman of the board that oversees Invest Atlanta.

Additional sponsors are being sought to help offset the cost to Invest Atlanta, which receives funding from the city to supplement the scant operating dollars it collects from fees for its role in underwriting construction projects in Atlanta.

Brian McGowan, the president and CEO of Invest Atlanta, told a city council committee in April that the consulting team would include the Brookings Institute and Deloitte. When the deal was approved last week, the contract was with Garner Economics and Deloitte.

Garner Economics is based in Fayetteville and headed by Jay Garner. The company’s web page says Garner founded the company in 2003 and draws on his 30-plus years of experience in “site location counseling, economic development and chamber of commerce professions.”

Click here to read more about the firm’s role in Atlanta.

McGowan said Atlanta has many attributes – the airport, future redevelopment of Fort McPherson, development of an area around a future bus/train station in Downtown, Buckhead Atlanta (formerly Streets of Buckhead), and 120,000 college students.

He added, “None of these, I think, has been knitted together.”

“Atlanta is a herd of cats when it comes to development, and that’s why we need an economic development strategy. I don’t expect everyone to navigate to the same star, but we ought to at least point North. We’re living in a fundamentally different economy from the one that went into the recession.”

These comments sparked the interest of Councilmember Yolanda Adrean, a CPA who wrapped up her career at Ernst & Young. Adrean pressed McGowan to define the “key economic drivers” that would serve as the “metrics” of the planned economic development strategy.

“The metrics are jobs and median income,” McGowan responded. “Also, this notion of economic integration: How are we bridging the divide between the city, the north and south, and the catalytic parts of the city …  that are creating new opportunities. Specifically, how we’re going to measure that is jobs and income.”

“It’s what we’ve heard for a year now: Education; Infrastructure. We sort of already know the list. I’m just trying to hear you say it.”

The city’s previous economic development was adopted in December 2004, three full years after then Mayor Shirley Franklin’s first election in 2001. 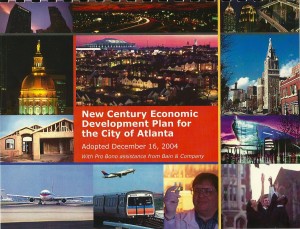 That plan was completed with free help from the consulting firm Bain & Co. It expired when Franklin left office after the 2009 election of Reed.

Click here to read the “New Century Economic Development Plan for the City of Atlanta.”

Click here to read the city auditor’s report about the “New Century Economic Development Plan for the City of Atlanta.”