The latest effort to police prostitution in Atlanta affirms that the solution can’t be to simply penalize it away. 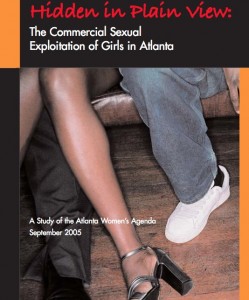 This 2005 report appears to contain the latest statistics available on prostitution in Atlanta. See story for a link to the report.

A proposal to be discussed Monday at Atlanta City Hall calls for banning convicted prostitutes from entering police-defined areas of prostitution. Support comes from residents who are tired of the crime, as well as its associated troubles, in their neighborhoods – mainly in Midtown and south of I-20.

Push-back comes from women’s rights advocates, among others, who contend the ban punishes only the convicted prostitute; does nothing for rehabilitation; and targets streetwalkers more than those who work in hotels and motels. In addition, the provision does little to penalize johns because only a small proportion are arrested, advocates contend.

The Atlanta Police Department initiated the legislation, according to the paper now pending before the Atlanta City Council. It had been on track to become city law during a three-week period, until Councilmember Felicia Moore acted to slow its pace.

APD proposed the amendment to the city’s existing prostitution law in response to complaints heard at multiple forums around the city, according to Carlos Campos, APD’s spokesman.

“We often hear from people out in the communities that they want chronic prostitution issues addressed,” Campos said. “The communities would like to see us make arrests, and to clear prostitutes off the streets. That is what they’ve told us.”

Residents are justified in their concerns, said Stephanie Davis, executive director of Georgia Women for a Change, Inc., a think tank and advocacy group for women’s issues. But banning male and female prostitutes from areas where they may also reside isn’t the answer, Davis contended.

Davis said the concerns of residents need to be balanced with other aspects of the crime of prostitution.

Those matters include crimes – such as domestic violence – that may have resulted in men and women becoming prostitutes; and the reality that few johns will be banned – because winning a conviction against johns is extremely difficult, Davis said.

“Georgia Women for Change is interested in equity of arrests for prostitution and johns, and for not criminalizing people who are desperate, mentally ill, or abusing drugs and already on the verge of homelessness,” Davis said.

“I would love to see this bill tabled indefinitely,” Davis said. “But I certainly hope the city will give time to put social services and a john school in place before they consider sending anyone out of an area that the police considers to be ripe for prostitution,” Davis said.

Campos said he could not provide information on arrests related to prostitution.

The city’s crime reporting data does not track prostitution. It tracks the big eight crimes – murder, rape, robbery, etc. – and activities such as curfew violations and truancies.

Davis observed that the latest available data may be that which is available in the 2005 report, “Hidden in Plain View: The Commercial Sexual Exploitation of Girls in Atlanta.”

That report provided the information that drove the “Dear John” public education campaign championed by former Mayor Shirley Franklin, which aimed to end the sexual exploitation of children in Atlanta. The campaign dwindled after Franklin left office.

The current proposal on banishing convicted prostitutes from certain areas was rocketing through City Hall until it was slowed at the Feb. 4 meeting:

The above actions set the stage for work session on the legislation Monday from 1 p.m. to 2:30 p.m. in the council’s Committee Room No. 2, located near the council chambers.