Atlanta is on track to spend up to $770,769 to remodel space for an art gallery in the city’s office building that once housed The Atlanta Journal-Constitution. 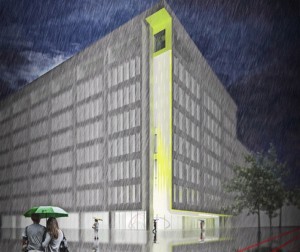 The planned exhibit space will encompass 3,400 square feet and provide two galleries accessible through one entry, according to Camille Russell Love, who heads the city’s cultural affairs programs and who presented the plan Tuesday to the Atlanta City Council’s Community Development Committee. The council is expected to approve the spending at its June 17 meeting.

The proposal to spend money for a city gallery elicited a protest from Ron Shakir, an Atlanta resident who’s a regular opponent of spending proposals when they’re discussed at committee meetings. Councilperson Cleta Winslow pushed back, contending that support for public arts is a wise investment.

The design for the project was produced by Stanley, Beaman & Sears and includes a nine-story scuptural element along the south corner of the building, facing Marietta Street. Inside will be one gallery with natural light, and a second gallery with artificial light that’s planned to host digital art, video and other light-sensitive projects, according to the city’s announcement in August 2012.

The new gallery, to be named Marietta Street City Gallery, will replace the former City Gallery East, which was closed when the city sold and vacated the old Sears building on Ponce de Leon to a developer who plans to create a collection of residential and commercial spaces. 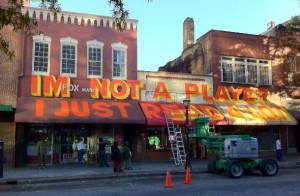 Buildings along Broad Street in downtown Atlanta, once known as Produce Row, were decorated during the Elevate art event in 2012. Credit: atlretro.com

Love said an artistic architectural feature will begin behind a reception desk, continue through a vestibule, and end in the space covered by the canopy facing Marietta Street.

Shakir protested the price of the renovation project. Shakir’s concerns were countered by Love, Winslow and committee Chairperson Joyce Sheperd.

“We have an art museum on Peachtree Street, what’s with this one,” Shakir said. “You’re talking about almost $1 million. Where does this fit in our priority? We already have a great facility. What’s going on here?”

The High, Love said, “Brings in major art exhibits from around the world. This will serve the needs of artists of Atlanta, where they will have exhibit space when they are not of a caliber to get into the High Museum. And, it’s a replacement for the gallery at City Hall East.”

Winslow responded that the city’s arts programs are especially important to youngsters, who benefit from creative outlets for their energy.

“Cultural affairs are extremely important to this city, especially to young people who may not be able to do other things,” Winslow said. “The program they’re talking about for this, the one they had on Broad Street, allowed children to draw on sidewalks with chalk.”

The chalk talk was part of the second annual Elevate art show, which included works by muralists to brighten the fascades of buildings along Broad Street, in Atlanta’s central business district.

Sheperd said the investment is worthwhile because it will liven up a stretch of Marietta Street, which is a gateway from the Five Points area to Centennial Olympic Park and the attractions that surround it.

“We know that building is being used by the Watershed department, but it helps with that, and the fact that it’s a tourist area,” Sheperd said. “When people walk and see the art [from outside], they can walk into the building and see the art. It’s for up and coming artists, and we can help expose them. I think it’s a great idea.”