The final round of planning for Atlanta’s downtown Gulch is to begin in earnest before the end of the year.

The state is moving forward with its effort to redevelop the Gulch, even though a presumed anchor tenant – commuter rail between Atlanta and Macon – is not now earmarked in the draft list of projects for the proposed 1 cent transportation sales tax voters will consider next year. The Atlanta Regional Roundtable is to approve a final list by Oct. 15.

The state’s idea for the Gulch is to have the private sector lead the redevelopment of 119 acres that have defied renewal efforts for decades. A contract with a development team is to be signed as early as the end of this week, said David Spear, a spokesman of the state Department of Transportation.

The signing would follow a Sept. 15 vote by the state DOT board to authorize its staff to negotiate the master development agreement with FIC Development, LLC. The partners are Forest City, a national firm that has developed successful transit oriented projects; Integral Group, an Atlanta-based real estate development company; and Cousins Properties, an Atlanta-based commercial developer.

Admittedly, lots of plans for the Gulch rest on shelves all around the city. The state’s current vision remains true to the general premises of some of those previous plans.

The cornerstone of the concept is for the Gulch to become the center of Atlanta’s ground passenger transit system.

The Gulch is to house a terminal station of some size that will serve as a connecting point for high-speed rail and commuter rail; for inter-city bus service; for the Atlanta Streetcar; and of course as the crossroads for MARTA’s North-South, East-West rail service.

A viable center of commerce and nearby homes is to be built above the functional transit hub to be established in the existing pit that gives the Gulch its name. Incidentally, this is the sort of land use that existed when the area emerged as Atlanta’s first railroad-based business district.

The site encompassses basically all of the blighted area south of Marietta Street, from CNN Center to MARTA’s Five Points Station, south in an arrow shape that ends near Garnett Street. The land is owned by private and government entities. 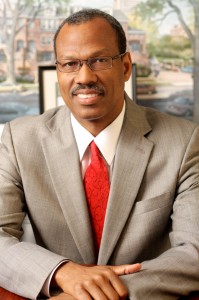 What makes the upcoming planning process different from previous efforts is that it begins with no preconceived idea of what sort of land use should be established at any location, said Egbert Perry, CEO of Integral Group.

The idea the team successfully encouraged the state to adopt is for the stakeholders to have a hand in the plan’s creation. The stakeholders list likely will include the state DOT; MARTA, which could build a new headquarters; private property owners in the 119-acre site; neighboring community groups; passenger bus companies; and the railroad companies that own corridors.

This process sounds like a large-scale design charette, a formal community-oriented planning collaborative that was used frequently during Atlanta’s recent construction boom. In it, various entities interested in a proposed development got a seat at the table to help decide where to locate the buildings a developer envisioned.

The pending process also sounds like another incremental step in the region’s development, one that may be easy to overlook in an area that has grown so quickly. But just a decade ago Atlantic Station was little more than a shuttered steel mill.

“This project is a sustainable economic development undertaking with good urban design at its core. With equal significance, it is a transit-related investment,” Perry said.

“So you have a transit investment, and an economic investment, and the question is how do you take those two and have it become something that becomes a pride and prize of the region, and become a centerpiece of the region’s longterm transit solution,” Perry said. “I’m as much uncertain as to what the final vision of the project will be as anyone else, because it will come together organically.” 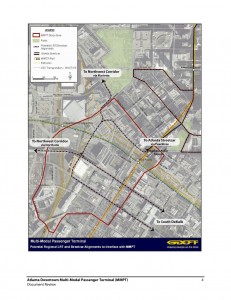