The home construction industry in the city of Atlanta remains erratic, and other market sectors are still shaking themselves out after the recession, according to a review of figures provided in Mayor Kasim Reed’s budget proposal. 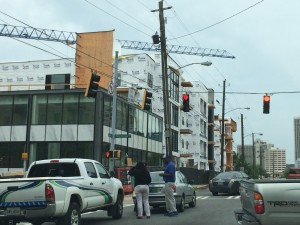 The 131 Ponce apartment building rising beneath the cranes is to provide luxury amenities in the Midtown neighborhood. Credit: David Pendered

The value of homes built in the city of Atlanta fell by 48 percent in 2013 compared to 2012. However, once all construction categories are included, the budget shows revenues from building permits are increasing steadily in the city.

The value of lumber sold in the city  plummeted during the recession. And lumber isn’t the only market sector that sank – and hasn’t recovered – in Atlanta during the economic reorganization that started before and continued after the recession.

As car dealerships closed their doors, the taxable sales in the automotive section fell to $8.6 million in 2013 from $14.2 million in 2008, according to the budget.

Alcohol is one category that was not affected by the economic downturn. As the budget states: 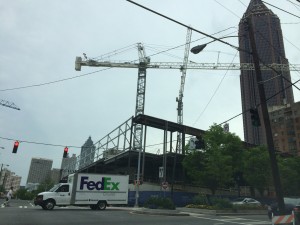 The Emory Proton Therapy Center (beneath the cranes) is expected to treat 2,200 cancer patients a year once it opens in 2016 near Emory University Hospital Midtown. Credit: David Pendered

In addition to the creating construction jobs, home building has a wide ripple effect. New homeowners tend to buy new furnishings, flooring, landscaping and security systems. Homeowners fueled the tremendous growth of retailers that cater to the do-it-yourself market, including Home Depot and Lowes.

In Atlanta, the number of residential construction permits the city has issued has varied rather dramatically since 2009. The variations include permitting for both new houses and new apartment buildings and townhomes. Here’s how the budget breaks down the numbers:

Atlanta intends to continue its efforts to make it easier to develop in the city by reducing the time needed to get a building permit, according to the budget.

Atlanta has set aggressive targets for commercial and multifamily permitting in FY 2015, according to the budget.

The goal is to provide a permit within 45 days for both categories. That would be an improvement from the median averages of:

Despite the downturn in residential construction, overall construction activity is on an uptick in Atlanta, according to the budget.