Two local chapters of a sorority started at Howard University have convened a Human Trafficking Forum Saturday to discuss ways to fight the illegal sex trade in Atlanta.

The trade is immense. A landmark government-funded study released in March showed Atlanta has the nation’s largest sex economy – $290 million in 2007 and growing, unlike the decline reported in other U.S. cities that were part of a study.

Children continue to be trafficked, the report determined, despite the surge by law enforcement to crack down on pimps who prey on youngsters. According to the report:

The forum Saturday is convened by the Atlanta Suburban Alumnae Chapter and the East Point/College Park Alumnae Chapter of Delta Sigma Theta Sorority, Inc. It is to begin at 9:30 a.m. at the Holiday Inn Express Hotel & Suites Atlanta Airport West – Camp Creek.

Four panelists moderated by Tenisha Taylor Bell, an executive producer with CNN, are slated to talk about human trafficking. According to the schedule, the panelists include:

The forum is among the first to occur on the subject since the release of the report titled, “Estimating the Size and Structure of the Underground Commercial Sex Economy in Eight Major U.S. Cities.”

The report was produced by the Urban Institute and funded by an award from the U.S. Department of Justice. 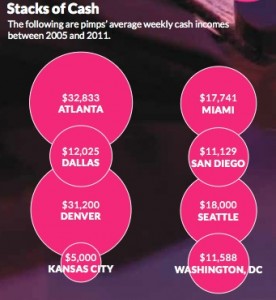 Pimps in Atlanta earn higher salaries than pimps in seven other U.S. cities that were examined. Credit: Urban Institute

Some of the local news stories about the report focused on a few findings:

There’s a lot more information in the 339-page report, which was created for the purpose of gaining an accurate estimate of the sex trade, and to fathom the structure of this underground economy.

According to the chapter on Atlanta:

The report determined that Atlanta’s pimps tend to be independent, though they do communicate on issues including police and pricing. Conversely, brothels and massage parlors tend to be part of a larger organization: