Atlanta’s moment of silence for Boston after the attack

Atlantans are paying quiet respects to Boston following the explosions during the Boston Marathon. 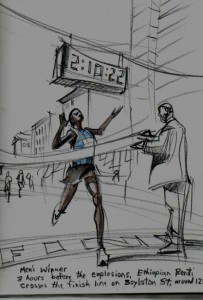 On Thursday, Atlanta Councilmember H. Lamar Willis intends to honor Boston’s victims with a moment of silence before his weekly run/walk, which he does with city employees.

Atlanta knows the pain of bombs that hurt civilians.

Marks from the bomb that went off in Centennial Olympic Park during the 1996 Summer Olympic Games remain on a statue in the park.

The next year, bombs detonated at an abortion clinic in Sandy Springs and at a lesbian bar in Atlanta.

The heightened state of anxiety has led to extra vigilance. Two alarms proved to be false.

A suspicious package inside a Wells Fargo Bank at 4454 Roswell Road was reported Wednesday at 11:05 a.m. to Atlanta police, police said. The bank was evacuated, the intersection of Roswell near Wieuca Road was shut to vehicles and pedestrians. A SWAT team arrived and examined the package – determining it was guidebooks.

On Tuesday, at about 1 p.m., Atlanta police officers responded to a call near Turner Field, near Hank Aaron Drive and Georgia Avenue, concerning a suspicious package under a garbage can that appeared to contain an electronic device. The call was made by the ballpark’s security squad, which was out on routine patrol. A SWAT team responded, and police said the device appeared to be no threat. 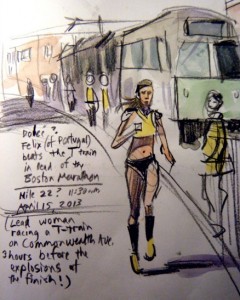 “My thoughts and prayers are with the City of Boston today and all those who have been affected by today’s tragic events. I am deeply saddened to hear of the loss of life and injuries suffered by so many people. Here at home, the City of Atlanta’s First Responders are currently taking additional measures to enhance the safety of our citizens and protect them from senseless acts of violence.”