Atlanta’s latest approach to reduce homelessness in the city calls for the creation of a non-profit organization under the control of the mayor. 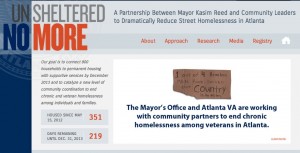 Atlanta’s efforts to reduce homelessness are outlined on its website, unshelterednomore.com

The proposal arises from the city’s work conducted with a portion of the $3.3 million innovation grant from Bloomberg Philanthropies. The new non-profit is to raise money from public and private sources, hire an executive director, invite relevant partners to join the program, and comply with all federal laws.

The legislation is to be discussed Tuesday at Atlanta City Hall. Topics likely to be addressed include how the non-profit will relate to existing regional programs for the homeless including the Gateway Center, Metro Atlanta Tri-Jurisdictional Collaborative on Homelessness, United Way Regional Commission on Homelessness – not to mention the homeless shelter at the corner of Peachtree and Pine streets whose fate remains in litigation.

The proposal establishes that mayor will appoint the chair of a planned transitional board, along with each of the 11 members of the transitional board. The legislation does not mention a confirmation process for the mayor’s appointees, or any role of the Atlanta City Council. Atlanta and Fulton County governments are to have representatives; DeKalb County, which currently is in the Tri-J collaboration, has no representative. 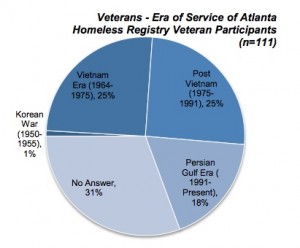 The largest group of veterans identified in the city’s registry of the homeless did not say when they served in the military. Credit: Unshelterednomore.com

The transitional board is to convene for the first time no later than June 30 and establish a permanent organization by June 1, 2014.

The organization is to set performance goals for recipients of funding and, presumably, select the recipients who will be funded to provide services to reduce the number of homeless in Atlanta, according to the legislation. In addition, the organization must be approved by the federal Department of Housing and Urban Development.

The mayor’s innovation delivery team is authorized to help implement the legislation, in addition to the city offices of human services and grants management.

The proposal calls for the creation of an oversight organization named Atlanta Homeless Continuum of Care. It will be the sole entity to serve in that federally designated role within the city of Atlanta – including the portion in DeKalb County.

Atlanta Mayor Kasim Reed has made the dramatic reduction of homelessness a priority of his administration. 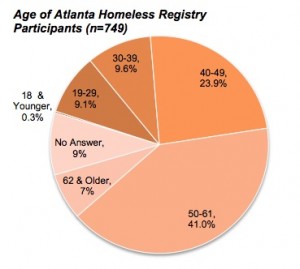 Atlanta’s registry of the homeless, conducted earlier this year, shows that almost two-thirds of the city’s homeless are over age 40. Credit: Unshelterednomore.com

This proposed organization would be fully established just after the start of Reed’s presumed second term in office. Reed faces no opponents in the fall’s election who have raised significant funding, according to campaign disclosure reports.

The public face of the mayor’s initiative is an effort named Unsheltered No More. It is the organization that in January conducted a by-name registry of the homeless in Atlanta.

The Atlanta City Council’s Community Development Committee is slated to consider the new approach, which is outlined in a Resolution 13-R-3111, in a meeting that’s to begin at 12:30 p.m. If the committee approves the proposal, it could move forward for adoption by the city council at its June 3 meeting.