A gold medal won in the 1996 Summer Olympic Games in Atlanta has helped raise a reported $1 million for disaffected children in Ukraine.

The medal was sold by a Ukranian boxer in late March as part of his effort to raise money for a program he sponsors for children. The medal was immediately returned to Wladimir Klitschko, Ukraine’s world heavyweight champion, by a buyer who was not identified, according to a number of published reports.

This story about Atlanta’s link to the Olympics legacy is one of several that are beginning to gain attention as the world prepares for the 2012 Summer Olympic Games in London, which are to begin July 27 and end Aug. 12.

Jay-Z is one quasi Atlanta link to the summer games, although this one hasn’t been widely reported.

The performing artist sought, but failed, to place a 40/40 Club at Atlanta’s airport when the city put concessions contracts out to bid last year. Late last week, the London organizers announced Jay-Z will be a headliner with Rihanna in the popular music lineup at the London Games. 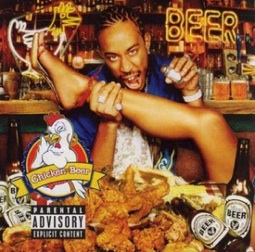 Chicken-n-Beer is a new restaurant concept to be opened at Atlanta’ s airport by the Atlanta-based entertainer Ludacris. Credit: Wikipedia

Jay-Z lost his battle for concession space at Hartsfield Jackson Atlanta International Airport to Atlanta-based rapper Ludacris, according to TheGrio.com, a news web site that covers news important to the African American community. Ludacris is slated to open at the aiport a place named Chicken-n-Beer, after his 2003 album of the same name.

Another Atlanta tie to the London Games is the Twitter feed from the British Consulate. The office serves six states in the southeast from offices in the Georgia Pacific Tower in Downtown Atlanta.

On April 12, the consulate Tweeted its thanks to Atlanta Mayor Kasim Reed, his spokeswoman Sonji Jacobs, Sandra McQueen and Georgia Fulbright scholars for helping to celebrate an event marking the 100-day countdown to the London Games.

The consulate’s Tweets are filled with insights that would interest anyone observing the sporting and economic development aspects of the London Olympics and other British issues. Among recent Tweets are references to:

The story about the medal that sold for a reported $1 million is of special interest because of the ongoing attention to athletes and entertainers who sell their awards.

Klitschko earned the Olympic gold medal by dominating boxing’s super heavyweight class. Klitschko emerged victorious from four rounds by defeating, first of all, Lawrence Clay-Bey, of the United States, and finally, Paea Wolfgramm of Tonga, on a points decision of 7-3.

Klitschoko returned home to Ukraine and entered public life with his brother, Vitali Klitschko, another boxing champion. Here’s a snippet about the brothers from a report on Pakistan’s news site “Daily Times”:

“The Klitschko family is one of the most celebrated in the ex-Soviet republic and has recently taken a more active role in opposition politics. Vitali Klitschko heads the Ukrainian Democratic Alliance for Reform (UDAR, meaning “punch” or “strike” in Ukrainian) party and has twice run for Kiev mayor. The Klitschkos are fierce critics of Ukrainian President Viktor Yanukovych and supporters of the jailed opposition leader Yulia Tymoshenko.”

Another news sites offered this comment from Wladimir Klitschko after the sale of the medal and, evidently, before it was returned. In these comments, Klitschko displays an appreciation of the Olympic spirit that organizers in Atlanta and Savannah (site of Olympic yachting events) strived so hard to nurture:

“It’s not just that I don’t regret giving it away,” Klitschko said of the medal. “I have a special attitude to this medal, which I won in 1996. This medal belongs, in principal, to Vitali [Klitschko ] and I. This is our common medal.

“Perhaps it’s somehow regretful to give it away. But on the other hand, we understand that it has to fulfill its function and create good, as it did for us and brought us good luck.”