It’s one of those cruel realities. By the time most women are diagnosed with ovarian cancer, it’s often too late to cure.

But an Atlanta gynecological oncologist and his team of scientists and researchers are trying to change that reality.

Dr. Benedict Benigno, founder and CEO of the Ovarian Cancer Institute, feels he is close to reaching the “Holy Grail” – developing an accurate test for the early diagnosis of ovarian cancer. The Institute is about six to eight weeks away from getting the results of how effective its early detection test has been on a trial of 800 women.

“If the early diagnostic test is as successful as I think it will be, it will be a monumental contribution,” Dr. Benigno said in an interview. “It is one of oncology’s Holy Grails. There’s a 92 percent chance of survival if ovarian cancer is diagnosed at Stage 1.” 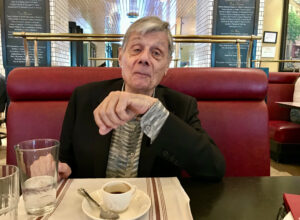 “When you usually discover it, it has spread throughout the abdominal cavity, and the survival rate is less than 40 percent after five years,” said Dr. Benigno, who clearly is excited by the potential of having developed a blood test that can detect ovarian cancer during its earliest stages. In his dream of dreams, women would get an annual blood test to be screened for ovarian cancer as regularly as getting a pap smear.

John F. McDonald, chief scientific officer of the Ovarian Cancer Institute and a Georgia Tech professor of biological sciences, said preliminary results of the first half of 800 women in the current trial, shows a success rate of nearly 95 percent.

But McDonald said a screening test must be essentially 100 percent accurate before getting approval from the Federal Drug Administration (FDA).

“We think we can do better,” McDonald said. “Dr. Benigno hopes we will come close to 100 percent accuracy. We’ve been working on it for years, and we are getting close to going to the FDA. I’m excited. But the worst thing you can do is over sell something, and then have to retract it. I want to be cautious. I want to be sure.”

The Ovarian Cancer Institute is breaking new ground with the use of “machine learning” in early detection and treatment of ovarian cancer. 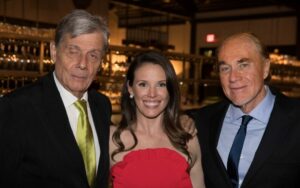 One can hear the excitement in McDonald’s voice when he starts talking about “nanoparticles” and how they can target cancer cells rather than using traditional chemotherapies that kills both healthy and cancerous cells.

“Instead of attacking cancer on the protein level, we are attacking it on the RNA level,” McDonald said. “We want to develop a nanoparticle that you can inject in the bloodstream and just target cancer cells. You could target different genes for different cancers.”

So far, the Institute has been testing drug therapies on rodents with “great efficacy,” and in January, it plans to submit an application to begin human trials.

The combination of an early detection test and optimal drug therapies for ovarian cancer would be ground-breaking in the medical field.

And both breakthroughs would be coming out of a modest lab with an annual budget of about $600,000 a year, a fraction of the size of the more established cancer centers. 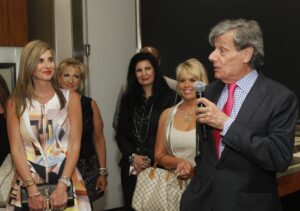 “We still use the Ovarian Cancer Institute to push the envelope,” McDonald said. “The beauty of the Institute is that it was designed to be an organization that raises money for high-risk research – for novel ideas that are not yet proven. Mega cancer centers tend to be conservative. The whole system is rigged against novel research. That’s why progress on cancer has been incremental. We wanted to move into more of a creative high-risk approach.”

Dr. Benigno, a native of New York whose grandparents immigrated from Sicily, has been working in the field since 1969, when he did a fellowship at Emory University in pelvic cancer surgery. From there, he spent four years in Saigon during the Vietnam War, when he continued his training. He then spent two years at MD Anderson before coming to chair the pelvic cancer surgery division at Grady Hospital and Emory University from 1975 to 1982.

“Your life spins on a dime. If I had not gone to Vietnam, I would not have met my wife,” Dr. Benigno said of his wife, Sheila, who was raised in France and who he had first met when he was in Saigon. They got married when Dr. Benigno was 37.

By the early 1990s, Dr. Benigno decided to work almost exclusively on ovarian cancer, and he went to Northside Hospital where he started the Institute, where he has been ever since. He teamed up with McDonald about 20 years ago to study ovarian cancer by combining biological sciences with technology.

At 83, Dr. Benigno has continued to serve as CEO of the Ovarian Cancer Institute. He retired from performing surgeries 12 years ago, and he said he scaled back his work a year ago. But he continues to raise money and conduct research for the Institute.

“It’s a very exciting time to be an oncologist. I want to see these projects that I’m working on come to fruition,” said Dr. Benigno, who also plans to write a novella and to improve his French. “I will probably work another two years.”

But don’t expect him to ever quit. “It’s never well enough. There’s always another escargot to eat,” he said philosophically.

No matter what, Dr. Benigno’s work over the years has helped women with ovarian cancer live longer. And the research currently underway could save countless lives.

“Dr. Benigno is a visionary,” McDonald said. “He was tired of treating women with no progress. His big dream is early diagnosis. We are really working hard to grant him that wish.”

I first became aware of Dr. Benigno when the mother of my dear friend, Lisa Rowley, was diagnosed with advanced ovarian cancer in late 2010. 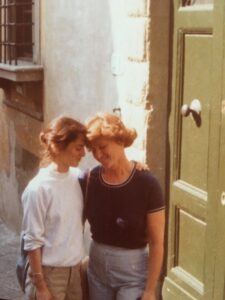 Lisa and Gabriele Rowley in Florence in 1978 (Special)

Lisa contacted me to say the doctor who was treating her mother had given up on her. I reached out to Bill Todd, who at the time was the president of the Georgia Cancer Coalition, who told me that if it were his mother, he would have her see Dr. Benigno, who was using novel ways to treat ovarian cancer.

When Gabriele Rowley met him for the first time, there was an instant bond – a shared love of the arts, books music and Europe.

Dr. Benigno remembered her fondly. It was easy to see why Gabriele had been so taken with him

“I’ve had such a privileged life where I’ve worked with women, and I’ve had the opportunity to really get to know women on a very personal level,” he said.

“After she died, I called Dr. Benigno to thank him,” Lisa told me on Sunday. “He extended her life by four years.”