The Trust for Public Land released its annual ParkScore Index last week grading the top 60 cities in the country on the strength of their urban parks.

The one constant was that Atlanta scored in the bottom half each year.

And yet Atlanta does have much to be proud of when it comes to parks. There’s the relatively new Historic Fourth Ward Park along the Atlanta BeltLine. And of course, there is the Atlanta BeltLine, which will have a series of new parks along its 22-mile corridor — the most dramatic being the green space around Bellwood Quarry, which will be turned into a reservoir.

About 20 years ago, we did add Centennial Olympic Park, one of the largest new urban parks to be developed in a downtown U.S city in recent history.

But despite our successes, we still are stuck in the mediocre middle when outsiders study our parks system.

Atlanta’s problem is simple. It keeps hoping to make major strides with incremental steps. If Atlanta wants to dramatically improve its park system, it’s going to have to develop a corresponding dramatic strategy that will get us there. 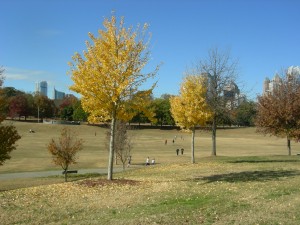 A view of the meadow at Piedmont Park

This is not really news. Back in 2002, just after Atlanta Mayor Shirley Franklin was elected, a group of metro leaders went to Chicago as part of the annual LINK trip.

One of the big ideas that was brought back home was that Atlanta should create a “Parks District” similar to what the delegation had seen in Chicago. The plan was for the district to have had its own dedicated source of funding.

But the recommendations of the mayor’s 2002 Parks and Green Spaces Task Force, chaired by landscape architect Barbara Faga, were not able to make it through the political process.

So Atlanta has been rocking along with a Department of Parks and Recreation that has to face all the annual budgetary struggles of having to compete with police, fire and sanitary services that are harder to cut during lean years.

“We are at a point of rising expectations with the Atlanta BeltLine and the Historic Fourth Ward Park,” said Michael Halicki, executive director of Park Pride, an independent advocacy organization for parks in Atlanta, DeKalb County and the rest of the region. “We have all bought into the vision of the BeltLine, but have we bought into the cost of maintaining it.”

Spending money on park maintenance certainly is not that sexy a topic. But when streetlights in a park are burnt out or when the benches are broken or when the sidewalks are cracked or when park doesn’t feel safe, it has a way of bringing down a whole neighborhood. 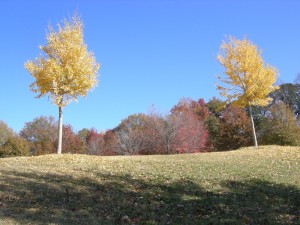 “There’s a need in our future to increase the funding for maintenance with dedicated funding for parks and green space,” Halicki said. “We need a city of Atlanta Parks District that gives us a way to have a dedicated source of funding for acquisition and maintenance.”

The city that ranks No. 1 on TPL’s ParkScore list is Minneapolis. It spends nearly $214 per person on its parks each year. By comparison, Atlanta spends less than $88.

And it’s not just about money. It’s about location and access. The Trust for Public Land carefully reviews what percentage of a city’s population lives within a half mile (a 10-minute walk or less) of a city park.

In Minneapolis, 94 percent of its population lives within a half-mile of a park. In Atlanta, it’s 65 percent.

The ParkScore index is highly interactive, and it is one where someone could spend hours looking at individual cities and studying maps of how parks are distributed geographically in each city.

Like any measuring stick, it has its limitations. It does not measure how many trees Atlanta has compared to other cities or how much green space we have that is actually privately-owned but contributes to our general sense of well-being.

But it does serve as a reminder that if we keep doing what we’ve always been doing year after year, the results will continue to be the same. And we’ll continue to be one of those middling cities, muddling by.

Previous Article
Europe disunited: Why the EU elections matter to us
Next Article
Let’s get through 2014 elections before we take on Hillary and 2016 elections