Who will profit from Atlanta’s new programs to reduce homelessness? Will the homeless be moved to dwellings in blighted neighborhoods west of downtown Atlanta? What will happen to the homeless shelter at the corner of Peachtree and Pine streets?

These central questions arose in a discussion Tuesday about Atlanta’s proposal to create a non-profit organization to take over the city’s federal and state funding that’s intended to reduce homelessness. 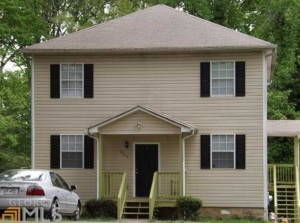 This dwelling off Hollywood Road appears similar to a single family home. It actually is a two-story duplex, fully rented at $2,600 a month, and is for sale priced at $75,000. Credit: homes.seegeorgiarealestate.com

No solid answers were provided before the proposal to create the non-profit was approved unanimously by the Atlanta City Council’s Community Development Committee and sent to the council for a vote June 3. The mayor retains considerable influence over the planned non-profit.

Specifically, the mayor will appoint the chair and a voting majority of members to a temporary board that is to establish a non-profit organization to manage the city’s program to reduce homelessness.

The Community Development Committee reined the mayor’s influence by amending the legislation. The amendment has three components:

Councilmember Cleta Winslow raised the issue of profits. She observed that service providers will profit from contracts awarded by the planned non-profit organization that is to select providers and decide whether they perform well enough to keep their contracts.

“Since we’re talking about money, people are going to be lined up,” Winslow said.

Councilmember Ivory Lee Young Jr. raised the question of whether the new non-profit will seek to have its contractors establish dwellings for the homeless in blighted neighborhoods. Young said he routinely hears of developers who have their eyes on turning vacant apartment complexes into housing for the homeless.

Developers have gone into struggling neighborhoods and built a number of structures that appear to be large houses, but actually are duplex, quadruplexes, and sometimes even rooming houses: A central hallway leads to single rooms that may have a bath and kitchen, or may share them.

Areas such as Hollywood Road, in northwest Atlanta, were developed this way before the city became aware of the trend and sought to curb it before the recession.

Councilmember Kwanza Hall brought up the question of the homeless shelter at Peachtree and Pine, which is operated by the Metro Atlanta Task Force for the Homeless.

“How will all this stuff we’re talking about address the corner of Peachtree and Pine,” Hall asked.

Hall continued his question by asking about effect of the new program on people who appear to be homeless and loiter in parking lots, and the feeding program offered by various groups.

Kristin Canavan Wilson, who oversees the innovation team funded by a grant from Bloomberg Philanthropies, said the types of programs Hall cited are not typically funded through the federal program.

This new program to reduce homelessness appears to spell the end of a decade-long regional effort that was devised at the urging of then Mayor Shirley Franklin.

The hope was to involve communities throughout metro Atlanta in addressing a persistent national dilemma that, in this region, focused on the central city because of the presence of Grady Memorial Hospital and a plethora of social services.

Back then, the United Way Regional Commission on Homelessness emerged as a staunch advocate in an effort to address homelessness as a regional issue and advocate of a central facility now known as the Gateway Center.

This coalition has frayed over time. DeKalb County, once a partner with Atlanta and Fulton County, has announced that it’s pulling out and intends to exercise more control over programs for its homeless population.

Consequently, Atlanta Mayor Kasim Reed’s administration has proposed placing the city in charge of a new non-profit organization that will provide services in the city and unincorporated Fulton County.