The Atlanta City Council is to receive its first official briefing on the proposed deal to build a new Falcons stadium Wednesday at a meeting of its Finance Committee. 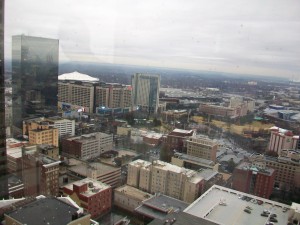 Portions of the Westside TAD, as seen from the offices of Invest Atlanta, include the Georgia Dome and Centennial Olympic Park. File/Credit: David Pendered

The presentation may reveal the city’s possible role in providing at least $100 million in financing for the planned stadium. Representatives of the mayor’s office, Falcons, and Georgia World Congress Center Authority, are expected to discuss topics including the authority and the hotel/motel tax.

One reason the council may be asked to vote on the stadium deal is to approve any financing that Mayor Kasim Reed may suggest be provided to develop the stadium or the surrounding area through the city’s Westside Tax Allocation District – which had a reported fund balance of $95 million in 2011. The city’s other, more likely, sources of major stadium funding are not typically overseen by the council.

Reed has said the city council will have to vote on the stadium deal. The reason the mayor thinks the council should be involved was not clear Monday to a few officials at City Hall.

Water-cooler conversation has it that the city’s role in helping to provide $100 million or more in stadium financing would be through Invest Atlanta or the Atlanta Fulton County Recreation Authority.

Invest Atlanta is a creation of the city, but the council doesn’t typically vote on funding for projects it help finance through the sale of bonds. The recreation authority has a nine-member board, six of whom are appointed by the mayor, and it typically is not overseen by the Atlanta City Council.

Any further use of the Westside TAD’s bonding capacity would require council’s approval, according to a city audit of the TAD program issued in May 2012. At the time of the audit, the city’s development arm evidently had indicated to auditors that it had unspecified plans for the Westside TAD.

The Westside TAD appears to have the capacity to repay additional bonds the council may agree to sell.

In fact, the Westside TAD is second only to the BeltLine TAD in its debt ratio, according to the audit – which is the most recent analysis of Atlanta’s TAD program.

Financial analysts consider a debt ratio of 1.2 to be a reasonable ratio. The Westside TAD had a ratio of 3.41, second only to the BeltLine TAD’s ratio of 6.74, according to the audit.

One topic not on the agenda is the effect on the stadium’s construction of a brand new city law.

The council enacted the law Feb. 4, and it requires companies funded by Atlanta to hire a certain proportion of low-income unemployed and underemployed city residents.