Fecal bacteria and residual chlorine flow at “problematic” levels from Atlanta’s sewer system into waterways and the repair bill could hit $40 million, according to new legislation to be discussed this week by a committee of the Atlanta City Council. 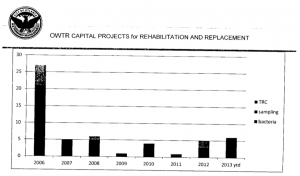 Atlanta’s Watershed Department cited this chart to illustrate the increase in the release of bacteria and chlorine from the city’s combined sewer overflow facilities. Click on the graphic for a larger version. Credit: City of Atlanta

An additional $11 million expense is looming for sewer-related upgrades planned near Turner Field, according to another new proposal. This project results from Atlanta Mayor Kasim Reed’s promise to residents of the Peoplestown neighborhood to improve the area following the 2011 flooding within and around the community.

The two items illustrate the reality that despite Reed’s vow during his Jan. 6 inaugural address to champion from $150 million to $250 million in new spending on roads, sidewalks, parks and other above-ground improvements during his second term, the city’s sewer system continues to demand significant amounts of money and attention.

Both of the sewer proposals are scheduled for consideration Tuesday in the Atlanta City Council’s Utilities Committee. The committee’s new chair is Councilmember Natalyn Moseby Archibong, who was appointed last week by council President Ceasar Mitchell. The committee’s former chair, Councilmember Howard Shook, will stay on the committee as a member.

City officials have known for some time of the hazards Atlanta is releasing into waterways. According to a memo from Frank Stephens, deputy commissioner of wastewater, that’s dated Nov. 8, 2013 and included in the legislation, 14-O-1005:

The repair projects at seven combined sewer overflow (CSO) facilities is to begin with $3 million taken from the city’s general fund, according to the legislation.

This initial funding will provide for the evaluation of issues such as odor and alternative disinfectants, especially at the Tanyard Creek facility near Buckhead. It also is to pay for the repair of equipment problems identified in the March 2013 inspection conducted by the state EPD.

The entire repair bill is estimated at $35 million to $40 million. The work is estimated to take 30 months and be paid out of the current year’s budget and the city’s next two budgets, according to the legislation. The source of funds is not identified, but Atlanta has been funding sewer improvements with sources including the 1 percent sales tax voters, which voters reapproved in 2013.

Atlanta can pay for the upgrades at and near Peoplestown with money now available in the city’s 2014 Water and Wastewater Renewal and Extension Fund, according to the legislation, 14-O-1006.

Atlanta’s historic woes with sewage pollution have faded from the public eye in the years since 1998. That’s when then Mayor Bill Campbell signed a federal consent decree to resolve a lawsuit filed by the U.S. Environmental Protection Agency, the Georgia Environmental Protection Division, the Upper Chattahoochee Riverkeeper, and a citizen downstream, according to cleanwateratlanta.org.

The audience at the Jan. 6 inauguration barely murmured when Reed cited as a success of his first term the 13-year extension of the deadline for Atlanta to comply with a federal consent decree to stop polluting waterways.

The issue of Atlanta’s sewage capacity remains a very real concern and is likely increase if development resumes at a pace that stretches Atlanta’s ability to handle sanitary sewage and storm water runoff.