In the past year, the devastation inflicted from hurricanes Matthew and Irma serves as a stark reminder that Georgia’s coast is vulnerable to the vagaries of nature. Wrecking countless homes and businesses, and shredding boats and docks along the entire coast, these hurricanes flooded St. Marys and Tybee Island, pounded the beaches of Jekyll Island and Cumberland Island, and overtopped the sea walls in Savannah and St. Simons. 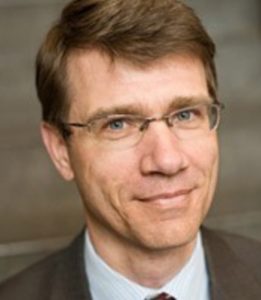 Many questions remain around the steps state and local governments can take to prepare for future storms and extreme weather events, especially for our shorelines and waterfront communities. With our curved coastline dubbed the “Georgia Bite,” we have some of the highest tides on the East coast, which can mean a significantly higher storm surge than other coastal states in the event of a hurricane or strong storm.

As coastal residents continue to rebuild, these events also represent one more reason why offshore drilling has no place off Georgia’s waters.

If the tidal surge had been awash in crude oil, our coast could be facing a nightmare scenario like the aftermath of hurricanes Katrina and Rita in 2005, where 8 million gallons of oil spilled due to hundreds of destroyed pipelines and drilling platforms.

Despite the serious risks, the Trump administration is fast-tracking the process to allow offshore drilling and exploration off the Georgia coast and along the Eastern Seaboard. Even before drilling is underway, seismic blasting is likely to cause significant harm to marine mammals including Georgia’s official state mammal, the endangered North Atlantic right whale, (which is already facing a steep decline, with 14 right whale deaths this year), as well as commercially valuable fisheries. 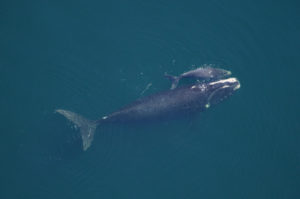 The sight of a North Atlanta right whale with a calf is increasingly rare. Birth rates have dropped by 40 percent since 2010 and one reason could be extended trauma after entanglements with ropes and buoys, according to sciencedaily.com. Credit: NOAA

But even absent a major disaster or catastrophic spill, the industrialization and infrastructure that accompanies offshore drilling—the pipelines, refineries, rigs and truck traffic—would irreparably change the coast we know and love.

To ensure that our coastlines are not subjected to these unprecedented threats, the City of Atlanta must join the already overwhelming and bipartisan opposition from Southern leaders and coastal communities and take a stand against drilling off Georgia’s coast. Over 130 East Coast cities and towns have passed resolutions opposing Atlantic drilling, including Savannah, Brunswick, Tybee Island, St. Marys, Hinesville, and Kingsland.

Although Atlanta is an inland city, it would not be the first to enter the fray. Columbia, S.C., signed a resolution last year opposing drilling. Even smaller communities, such as Porterdale (population 1,495), located near Covington, have done the same.

It makes sense that Atlanta would be in favor of preserving this incredible, unique region. Unsurprisingly, the Georgia coast is Atlanta’s favorite vacation destination—Atlantans visit the Georgia coast in greater numbers than any group in the country.

Our healthy waters and clean beaches draw tourists from across the state, travelers from all corners of the U.S., and visitors worldwide. Savannah’s history and architecture rival those of any coastal city in the nation. Tybee Island provides a rustic beach get-away. The Golden Isles resorts boast unparalleled accommodations. And St. Marys serves as the gateway to the coast’s jewel, the Cumberland Island National Seashore.

Because of these resources, the local ocean economy thrives, supporting more than 24,000 jobs and generating over $1.2 billion to Georgia’s economy.

Protecting the Georgia coast is also in line with the progressive goals of the City of Atlanta to source 100 percent of its power from clean, renewable energy by 2035. This pledge puts Atlanta at the vanguard of American cities. While Atlanta has committed to curb its use of carbon fuel, curbing the development of new, risky fossil-fuel sources off our Georgia coast would take that commitment one step further.

As the debris from the storm is cleared and flooding recedes, we must take action to prepare for what kind of future we want for our state and our coast. Hundreds of communities, thousands of businesses and millions of residents have spoken clearly that offshore drilling is not part of that future. To preserve all that is special about this region—our seafood, pristine beaches, the historic character of our coastal cities and port towns—Atlanta’s voice is needed in the fight to keep offshore drilling and seismic testing off Georgia’s waters.

Note to readers: Alice M. Keyes, vice president of coastal conservation for One Hundred Miles, contributed to this guest column. Read more about the two organizations – SELC and One Hundred Miles. 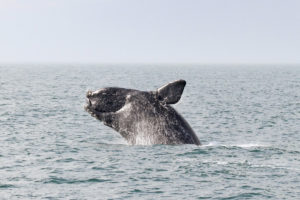 The endangered right whale, Georgia’s state mammal, is in distress. NOAA says with 99.99 percent certainty that their numbers have declined since 2010, including 14 deaths this year. Credit: Georgia DNR 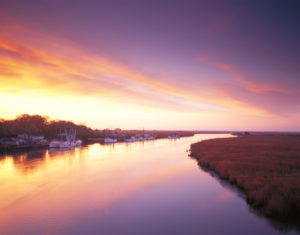