Georgia’s efforts to quench metro Atlanta’s thirst include a $1 billion proposal to pump water from one aquifer to another and then release it into the Flint River in times of drought.

On Tuesday, the board of Department of Natural Resources is to consider a request for permission to drill an experimental well near Albany to see if the plan is feasible. A committee of the board approved the proposal Monday.

Advocates contend the practice would preserve the amount of water retained in Lake Lanier, while increasing the flow in the Flint River and the river it helps form – the Apalachicola River. Critics disagree, including the Flint Riverkeeper and Georgia Rivers.

The Southwest Georgia Regional Commission has asked the state for an easement to drill a well on state-owned land, the Elmodel Wildlife Management Area. The wildlife area is in Baker County, between Albany and Bainbridge.

The purpose of the experiment is to determine if a water management system called Aquifer Storage Recovery could help the region secure its water supply, according to the application the regional commission filed in April 2012 with the Georgia Environmental Finance Authority, a funding arm of the state.

The idea is to pump water from Floridan aquifer to the deeper sand aquifer, at times of plentiful water. Georgia is in such a condition now, as the persistent drought conditions have ended, according to the U.S. Drought Monitor. 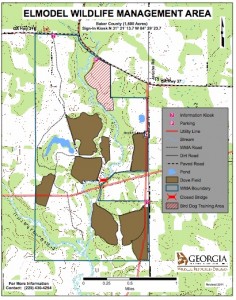 The Elmodel Wildlife Management Area is located between Albany and Bainbridge. Credit: http://www.georgiawildlife.com/maps/hunting/region5

During dry times in the future, water from the deeper aquifer would be pumped into the Flint River to increase its flow. The measure for an acceptable flow would be taken a gauge near the start of the Apalachicola River.

The application cites a number of reasons the commission thinks the proposal supports Gov. Nathan Deal’s water policy. The governor has called for a series of measures, mainly the construction of reservoirs, that aim to provide an adequate supply of water for human use at reasonable prices.

Gordon Rogers, executive director of the Flint Riverkeeper, contends the Aquifer Storage Recovery plan is everything but a reasonable approach to water management. In an email, Rogers outlined some reasons he opposes the proposal:

For its part, the regional commission says it is motivated to protect an agriculture-based economy that generates $2 billion a year at the “farm gate,” plus its multiplier effect, according to the application. The farm industry is reliant on irrigation and water supply is not reliable, the application states.

The ASR plan was devised with help from companies with political and economic influence. 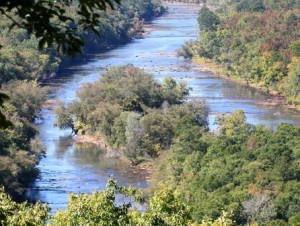 The regional commission also realizes its political position in the effort to address the state’s fragile water system. Over the next few years, water management plans are expected to be crafted for north Georgia and also the entire length of the Chattachoochee River.

To that end, the commission’s application is laced with references to the tri-state water war and the water supply concerns of its upstream neighbors – Columbus and metro Atlanta. Sometimes the reference is none too subtle:

Meanwhile, the ink is still drying on a report last week from scientists in Florida that linked the low flow in the Apalachicola River to the great decline in the oyster population in Apalachicola Bay starting in 2012 and continuing today. The BP oil spill was not a factor in the decline, according to the study by the University of Florida Oyster Recovery Team.

Previous Article
Attorney Andy Cash, incoming JDRF Georgia board president, had his Moment when his sons were diagnosed with type 1 diabetes
Next Article
Other states invest in transportation while Georgia mostly stands still