Atlanta’s water rates to be stable through 2016, Moody’s predicts

The year 2016 may prove to be a critical year for customers of Atlanta’s water system. 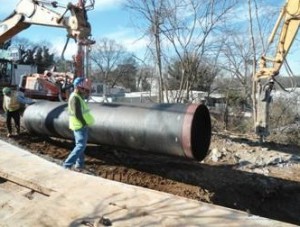 That’s the year Atlanta may ask voters to extend a 1 percent sales tax to help pay for upgrades to the sewer and storm drain system. Atlanta voters instituted this sales tax in 2004, and extended it in 2008 and 2012.

The year 2016 also the furthest year that a New York credit rating agency predicted that Atlanta’s water rates are likely to remain stable.

Moody’s Investors Services cited both the sales tax and the water rate in a recent credit outlook that determined Atlanta’s recent completion of two sewer construction projects was a “credit positive.” The projects were delivered on time and $50 million under budget.

Moody’s observed that the cost saving represented 8 percent of the system’s gross revenues for Fiscal Year 2013 and added:

Moody’s also observed the fiscal consequences of Atlanta winning approval from the federal Environmental Protection Agency to extend the deadline to complete the sewer rehabilitation program:

The two projects were delivered at a cost $50 million below budget and ahead of a July 1 deadline imposed by the federal Environmental Protection Agency. Atlanta reduced costs by revising the design and building the facility on city-owned land.

This is how the city characterized the savings in its statement of July 10: