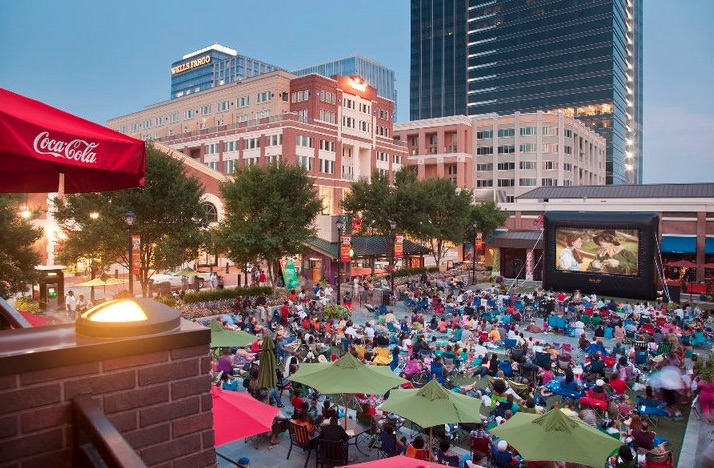 Two funding issues related to the development of Atlantic Station illustrate the ongoing oversight needed to manage the type of big urban renewal projects so popular in Atlanta. 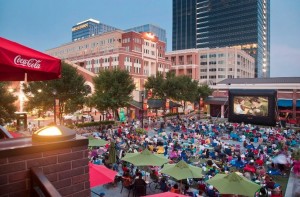 The crowds Atlantic Station was expected to attract resulted in the developer paying the Ansley Park Civic Association to implement traffic calming measures in the neighborhood. The measures were intended to deflect traffic created by events such as free movies in Atlantic Station’s Central Park. Credit: atlanticstation.com

Atlanta still owes the Ansley Park Civic Association up to $428,085 related to construction of the 17th Street bridge – 11 years after the yellow bridge opened, on Jan. 5, 2004.

In addition, the city is to pay an outstanding invoice of up to $266,480 for sidewalks, driveways, curbs and gutters in Ansley Park. The work is related to the Ansley Park Pedestrian and Streetscape Project, which dates to the construction of Atlantic Station.

These two funding issues were resolved when the Atlanta City Council voted March 2 to authorize Mayor Kasim Reed’s administration to pay the bills to the association and for the streetscape improvements. The status remains unclear regarding the second of two round-abouts that were to be built on Peachtree Circle.

The issues underscore the complexity of management challenges Atlanta could face in the future as a result of redevelopment projects including Turner Field, Underground Atlanta, the Boisfeuillet Jones Atlanta Civic Center, and even Fort McPherson.

Residents expect Atlanta City Hall to protect their neighborhoods during urban renewal. This expectation is evident in two real-time projects – Turner Field, and the Memorial Drive corridor, from Oakland Cemetery to the city limits in DeKalb County.

At its Tuesday meeting, the council’s Community Development Committee is to consider proposals to oversee development in these two high-profile neighborhoods. Although the city isn’t necessarily to have a direct role in the developments, residents expect Atlanta to have a say in what gets built:

The issues involving Ansley Park date to 1999. Residents feared their neighborhood’s quiet streets would become clogged with traffic heading to or from Atlantic Station from Piedmont Avenue via the 17th Street bridge. Piedmont Avenue becomes Piedmont Road north of I-85.

Neighborhood leaders had a number of options that could have slowed the development of Atlantic Station. The development team, led by Jim Jacoby, opted to avoid the potential delays by paying Ansley Park to devise and implement various traffic calming measures. In addition, 17th Street was configured in such a way that impeded vehicles from departing Atlantic Station via the bridge and driving through Ansley Park.

Terms of this agreement were not disclosed to the public. Rumors set the amount at about $1.1 million.

The civic association evidently provided a portion of the money to Atlanta. Atlanta used the money as some, or all, of the local match to draw down federal funds for the bridge and related road work. Terms of the civic association’s deal with the city call for Atlanta to return to the association any of its funds that were not used, according to the legislation.

Previous Article
The Voting Rights Act, 50 years later: do we have the capacity to initiate change for mutual benefit?
Next Article
Meria Carstarphen’s Selma roots to define her tenure at APS