Tennis sensation Andy Roddick is scheduled to play in a tournament at Atlantic Station in July as part of a major tennis deal announced Monday.

The Atlanta Tennis Championships has signed Atlantic Station as a multi-year tournament site. The event scheduled from July 14 through July 22 is the opening event of the Olympus U.S. Open Series season. 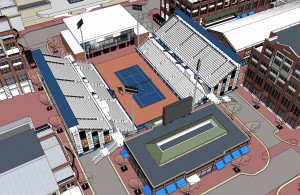 The event has the potential to energize Atlanta sports fans in the days leading up to the July 27 start of the London Olympic Games. Atlanta will be celebrating its role as host city of the 1996 Atlanta Olympic Games.

The tennis tournament promises to draw big crowds to Atlantic Station, the mini city built on the site of a former steel mill just north of Georgia Tech’s campus. More than 72,000 spectators attended such tournaments in Atlanta in 2009 and 2010, according to information provided at the announcement.

At least six tennis courts will be built at Atlantic Station to accommodate the tournament play. At least three competition and three practice courts are slated to be built, according to the press release.

Center Court will be built between two large grandstands to be built in front of Strip Restaurant, located on 18th Street near the movie theater. The grandstands are to accommodate 4,000 fans.

Atlanta Mayor Kasim Reed spoke at the event. The remarks were inaudible in some areas of the event, lost amidst the buzz of the crowd and city. According to his prepared remarks, the mayor said:

“Atlantic Station is a perfect location for this outstanding summer event and it provides access with convenient parking and nearby MARTA for the thousands of tennis players in our city. This event brings a significant economic impact to Midtown Atlanta and exciting entertainment for us all.” 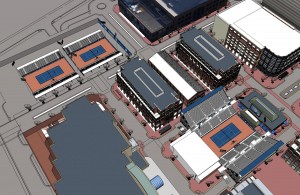