Editor’s note: This story has been updated to correct the source of the photo of DCA Commissioner Mike Beatty.

The effort to spur businesses that could be served by the future Atlanta Streetcar along Auburn Avenue got a lift Tuesday in the form of a state program that provides tax credits for new jobs. 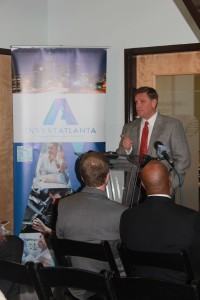 Mike Beatty, commissioner of the Georgia Department of Community Affairs, speaks at the announcement of a new state tax credit zone along Auburn Avenue. Credit: The Wilbert Group

A section of Auburn Avenue now is an Opportunity Zone. The designation will provide a tax credit of $3,500 for one new job to companies that create two net jobs. The tax credit lasts five years, according to the state Department of Community Affairs, which approved the new zone.

The designation is particularly important, coming as it does amidst a whirlwind of activity – both planned and halted – along the street that once was the center of black commerce in the south.

In 2012, the city halted a development plan for the old Atlanta Daily World newspaper building that called for demolishing most of the building. Three months after that decision, the National Trust for Historic Preservation announced, in June, that it was again naming the Auburn Avenue commercial district to its list of most endangered places in the United States.

Auburn Avenue’s advocates hope the beleaguered district is finally getting some breaks. The site of Tuesday’s announcement was a nod to better times – the office of the Epsten Group, a sustainable architecture firm that opened along the corridor.

“This opportunity zone designation for the Auburn and Edgewood Avenue district will benefit new and existing businesses in an area that is rich in history and is poised for a cultural and economic resurgence,” Atlanta Mayor Kasim Reed said in a prepared statement.

DCA Commissioner Mike Beatty cited the corridor’s history in his remarks. In addition, Beatty praised the work of the Martin Luther King Jr. Advisory Council, which was authorized by the Legislature and signed into law by Gov. Nathan Deal in a ceremony in 2011 at Ebenezer Baptist Church. 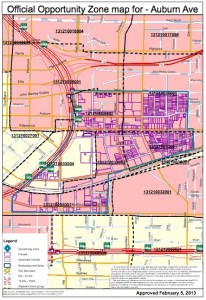 These are the boundaries of the new opportunity zone the state created along Auburn Avenue. Credit: DCA

“The Martin Luther King, Jr. Advisory Council, chaired by Sen. Emanuel Jones (D-Decatur), was created by the Georgia General Assembly to promote the legacy and teaching of Dr. King, and housed within DCA,” Beatty said in a statement.

“This council has sought ways that it can partner with DCA and local communities to bring the power of Dr. King’s legacy to bear on improving our communities, and supporting an opportunity zone application for the Sweet Auburn Historic District was a great way for the  council to begin that effort,” Beatty said.

Central Atlanta Progress used the occasion to release the latest guide produced by the Atlanta Downtown Improvement District. The guide aims to help businesses that are interested in the streetcar corridor.

“This is more good news for the Auburn-Edgewood corridor,” Hall said in a statement. “Last week, we laid the first tracks for the Atlanta Streetcar, our ‘Downtown Re-Connector.’ With the Auburn Avenue Opportunity Zone, we are preparing the way for existing small businesses to expand while offering an incentive for prospective businesses to join us and shape the future of Atlanta’s legacy corridor.”

The Auburn Avenue Opportunity Zone is the eleventh to be created in Atlanta, according to DCA. The zones are created by the state, at the behest of a local government, in areas that qualify on the basis of poverty and other factors.

The opportunity zones are overseen by Invest Atlanta, the city’s development arm.

“Invest Atlanta is highly committed to the success of the Auburn Avenue district, both for its historical significance and its tremendous potential as a destination for innovative, forward-looking businesses,” Brian McGowan, Invest Atlanta’s CEO, said in a statement. “The opportunity zone designation will help business owners who might not have otherwise considered Auburn Avenue recognize that potential.”

According to Georgia Power, which helps governments seek the business development designation, other opportunity zones in the city include:

“The Atlanta Streetcar project will help to revitalize this corridor and, thanks to this announcement, there will be an additional incentive for businesses to make further investments along the streetcar route,” the mayor’s statement concluded.