Auburn Avenue Research Library offers resources for and by the community 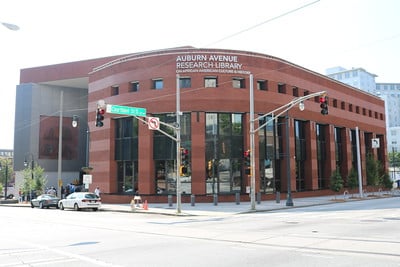 When the Auburn Avenue Research Library (AARL) reopened its doors this past August, the library’s staff and supporters envisioned the newly renovated space as an ideal location for hosting community cultural events. On Oct. 11, this vision came to fruition when a crowd gathered there for an event that highlighted collaborations between academic institutions, public libraries, and community organizations.

This group of archivists, academics, and community members explored the idea of community archives, and AARL seemed to be a fitting venue for such a gathering. As AARL archivist Derek T. Mosley observed, “The Archives Division really wants to bring the community into the conversation about collecting materials and making sure we provide valuable information for the future.” 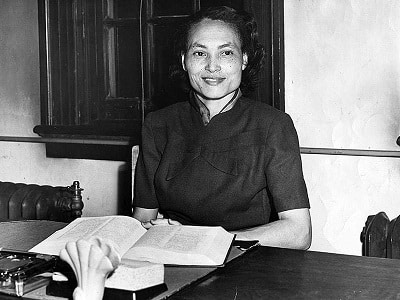 AARL, a special library of the Atlanta-Fulton Public Library System, had its beginnings in 1921, when the Auburn Branch of the Carnegie Library of Atlanta became Atlanta’s first public library for African Americans (the Atlanta-Fulton County Public Library System was finally integrated in May 1959, after the request for a library card by Irene Dobbs Jackson, mother of future mayor Maynard Jackson, set in motion a vote to integrate by the library’s board). The AARL library became a cultural center for Atlanta’s African American community.

In the early years, the library was managed by several African American women, who curated the “Negro History Collection” that consisted of non-circulating materials relating to black history and culture. Over the years the collection was housed at two other locations before being transferred in 1994 to the newly built Auburn Avenue Research Library. As the collection expanded, the library outgrew its space. In 2008, Fulton County voters overwhelmingly approved a bond referendum for capital improvements to the Atlanta-Fulton County Library System, which included funds for renovating and expanding AARL. 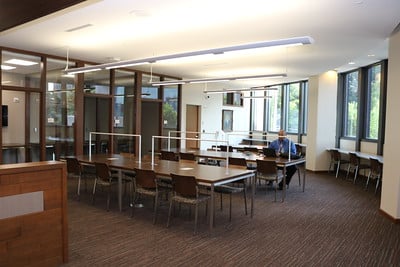 The reading room was renovated with ease of research in mind.

The renovated AARL building opens a new chapter in the library’s history, while also celebrating its historic roots. The renovation added 10,000 square feet to the building, which now totals 56,000 square feet. The building also features a new auditorium that seats approximately 215 people, enabling the library to host large events like the community archives program. The renovation project included an extensive technology upgrade, featuring mobile video walls and a touch-screen guide to introduce visitors to the building and its collections. The reading rooms are now furnished with equipment that provides researchers with easier access to audiovisual materials.

The Archives Division, which occupies the top two floors of the building, preserves and makes available rare and unique historical records related to Africana history and cultures, with an emphasis on local Atlanta history. The collection is housed in climate-controlled, closed stacks that are accessible only to staff, and materials must be viewed onsite in the reading room. The archives stacks can be glimpsed through a glass wall in the reading room. “The renovation allows us to interact with our patrons in a variety of ways and showcase our collections not just in the reading room but all over the building,” Mosley observed. 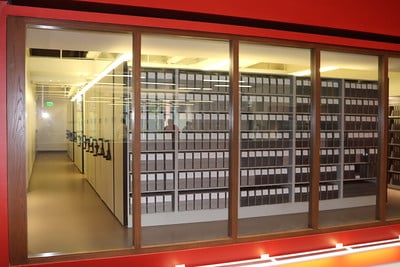 The climate-controlled closed stacks protect materials from damage and deterioration.

Researchers are able to explore the history of Auburn Avenue (the “commercial, cultural, and spiritual center of African American life in Atlanta prior to the civil rights movement,” according to the New Georgia Encyclopedia) through organizational records, business records, personal papers, and photograph collections. The holdings richly document the civil rights movement in Atlanta and beyond through the records of the NAACP Atlanta branch and of activists such as Hosea Williams and Andrew Young. The archives also document Atlanta communities through the Neighborhood Arts Center records and the National Black Arts Festival records.

Every October, Georgia joins the nation in celebrating Archives Month, which provides us with an opportunity to draw attention to the value of Georgia’s historical records, publicize the many ways these records enrich our lives, and recognize those who maintain our communities’ historical records. In celebration of Archives Month, AARL has some of its gems on display right outside the archives reading room. AARL has played an important role as a cultural center in Atlanta for almost 100 years, and the library’s newly renovated and expanded space enables it to continue its mission of promoting the study of the culture and history of peoples of African descent through community collaborations.

Rebecca Thaler Sherman is the project archivist for the Sam Nunn Papers at Emory University’s Stuart A. Rose Manuscript, Archives, and Rare Book Library. She is also a member of the Georgia Archives Month committee.