“Avengers: Endgame” is, in every way, Loki deficient.

Allow me to make clear where I stand on the MCU (Marvel Comic Universe). I like it. On occasion, I even love it. However, what I like/love the most about it is how it respects and enjoys its fans. (It was true of the comics, too, which I read fairly religiously in the late ‘60s and early ‘70s.)

A poster for “Avengers: Endgame”

Anyway, as most of us already know, “Avengers: Endgame” is the follow-up/finale to last year’s “Avengers: Infinity War” in which the looming villain Thanos (Josh Brolin) snapped his fingers and destroyed half the planet’s population.

His half-baked strategy: less humans would be a lot better for the birds and the bees and the flowers and the trees and the birds up above and everything else.

As far as our coalition of superheroes was concerned, that meant we lost everyone from Black Panther to Dr. Strange to Spider-Man.

“Avengers: Endgame” begins with a bucolic Hawkeye (Jeremy Renner) family picnic. Then…snap…Hawkeye looks around and his wife and kids have disappeared. Meanwhile, up in space, Tony Stark/Iron Man (Robert Downey Jr.) has enough oxygen to last him one more day. Spoiler Alert: he is rescued by a very powerful recent addition to the MCU.

The movie flashes forward five years to see how other Avenger survivors are dealing with life after the Thanos snap.

They include: Thor (Chris Hemsworth) who’s gone Big Lebowski in a big way (think beer belly and belching); a still wise-cracking Rocket Raccoon (voiced by Bradley Cooper); Black Widow (Scarlett Johansson) who…I haven’t the slightest idea; a revamped Hulk (Mark Ruffalo) who, having figured out how to stay huge and green but keep his wits about him, is now a kind of jolly green giant; and Captain America (Chris Evans) who seems more at a loss than ever. 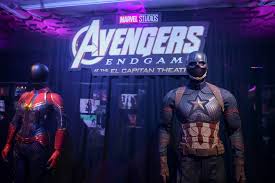 A poster of “Avengers: Endgame”

What to do? Well, the key is provided by Ant-Man (Paul Rudd), not officially an Avenger, but ready with a change-it-all time travel idea that provides the movie’s next two hours.

I mention that because “Avengers: Endgame” is a three-hour movie (that’s edging toward “Lawrence of Arabia” territory). Yet it never feels long or filler-filled, which is a lot harder to do than you’d think. To filmmakers Anthony and Joe Russo’s credit, they even dare to start with almost an hour’s worth of quiet as our grief-stricken superheroes regroup and try to figure out what to do next…if anything.

If you are a fan, I can’t imagine you not being thrilled and eager to see it a time or two more. If you’re not, my guess is, you’ll still enjoy yourself.

Perhaps Thanos himself puts it best: “I am inevitable”

So is “Avengers: Endgame.” And its record-breaking, billion-dollar opening.

Previous Article
In an age when government and science are distrusted, vaccinations face resistance worldwide
Next Article
New Program to Increase Awareness and Knowledge of Cardiovascular Diseases Globally