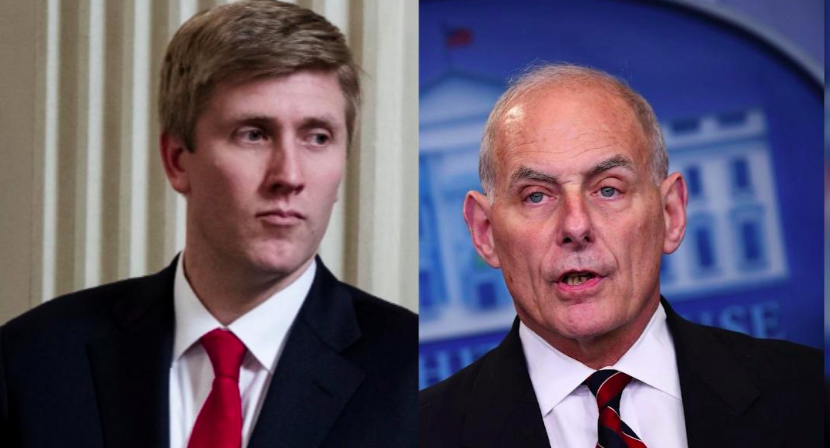 When someone who has gone as far and as fast as Nick Ayers slams his foot on the brakes and says “whoa,” there’s something big and scary in the road ahead.

Ayers, the 36-year-old Kennesaw State graduate who began his political career as a college volunteer in Sonny Perdue’s 2002 campaign for governor, was considered to be President Donald Trump’s choice to replace John Kelly as White House chief of staff. According to reports, he actively lobbied for the position.

After Trump said Saturday that Kelly would be leaving by the end of the month, however, Ayers surprised Washington, announcing Sunday that he’s leaving his post as Vice President Mike Pence’s chief of staff at the end of the month and returning to Georgia. He won’t be taking Kelly’s job.

“I am in the process of interviewing some really great people for the position of White House Chief of Staff. Fake News has been saying with certainty it was Nick Ayers, a spectacular person who will always be with our #MAGA agenda,” Trump tweeted Sunday night.

The president is said to have seen a little of himself in Ayers, who in addition to rising through a series of prestigious political jobs has amassed between $12 million and $54 million, according to financial disclosures. Much of that has come through political consulting and ad-buying companies, but Ayers also has investments in everything from pecans to healthcare technology.

The official unofficial explanation for the abrupt breakdown was that Trump wanted the aide to commit to two years, while Ayers wanted to be able to go back to Georgia sooner. Maybe that was part of it, but it wasn’t the larger part.

There have been the usual reports of palace intrigue. Ivanka Trump and Jared Kushner are said to be big supporters of Ayers, while Melania Trump has been cool. It’s generally agreed, however, that Ayers had emerged as the president’s choice for the job.

Whatever may have triggered Ayers abrupt change of course, the real reason for it is obvious, and for an administration facing growing challenges, ominous. Ayers is the prototype of a young, ambitious Republican operative, well versed in the ways of both Washington and Red State America. When he was gunning for the job, Ayers would have known that getting it would involve lawyering up and facing closer scrutiny of his own affairs, not to mention a temperamental boss. Until this weekend he seemed ready for those risks.

At a decisive point, Ayers has to have reached the judgment that taking this job with the administration, or even keeping the job he has, would no longer be good for Nick Ayers. Already, there are stories about Trump White House staffers being unable to land midlevel corporate jobs. Ayers reportedly is set to run a pro-Trump Super PAC, so that’s not an issue. But he will be doing so from a distance of several hundred miles.

As much as any court statement filed or House Democratic Caucus press release, Ayers’ departure is a sign of darkening prospects for this administration. When the president can no longer attract raw ambition, he loses the reality show dynamic of “The Apprentice” which has worked so well for him. You can’t say “you’re fired” if nobody wants to be hired.

The president reportedly hasn’t spoken to Kelly in weeks, so maybe it won’t matter if Kelly leaves before his replacement can be recruited, but it would be interpreted as another sign of a White House in disarray.

Last week’s news was filled with the parsing of largely redacted sentencing statements, producing little to fashion headlines from but providing mute evidence of an avalanche of information yet to come from special counsel Robert Mueller and the Southern District of New York.

A true chief of staff would be responsible for breaking a lot of bad news to the president over coming months, not just with regard to the investigations into his Russian connections and payoffs to women, but about the Democratic House, the teetering economy and the military buildup on the Ukrainian border.

That might be what some would call a nightmare job, but it was one Ayers has been pointing toward his entire career, one that he wanted badly, right up to the day he could have claimed it.