Babe + Sage Farm: Thanksgiving feast with farm-to-table ingredients so fresh the dishes are ‘fit for a king’ 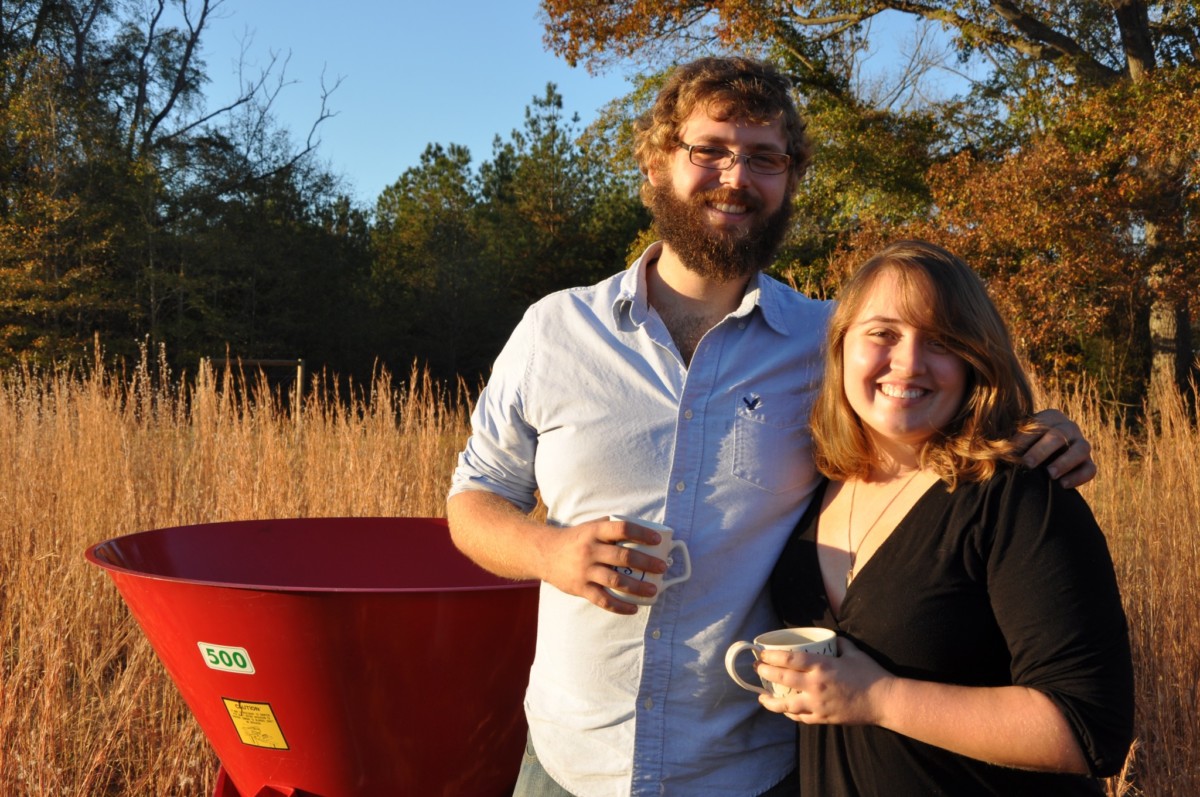 Editor’s Note: This is the last of three stories this holiday week that look at the farm-to-table movement in Georgia.

GORDON – Much of our Thanksgiving Day feast was farm-to-table food.

The turkeys and vegetables had grown in the fields behind a farmhouse that Sherman’s army didn’t torch during the March to the Sea. 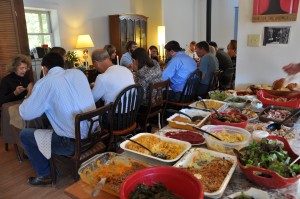 The distinction of dishes prepared with homegrown ingredients was that they tasted a lot like – food. Their collective flavors tapped memories of meals enjoyed long ago, in a time before everything was picked early after being grown with a dollop of fertilizer and slathering of chemicals.

The hosts were Chelsea Losh and Bobby Jones, partners who two years ago started Babe + Sage Farm. Each was recently graduated from the top of their class at Georgia College and State University, and went to Pittsboro, N.C. to get certified in organic farming.

The partners signed a lease to pull the old Oetter family farm back from the bramble and have created what Wall Street would call a “going concern.” Babe + Sage products are sold at the farmers markets in Milledgeville and Macon; to consumers through the weekly CSA program, short for community supported agriculture; and occasionally to restaurants. 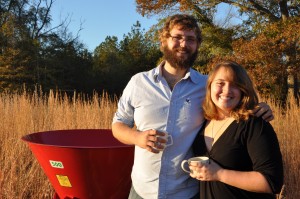 On Thanksgiving Day, the couple served the food on a table a few steps from a table that comfortably handled the 18 diners. Along with the relatives were Elizabeth and James Oetter, the farm family who have worked out the deal with Losh and Jones to work the land.

Losh gave a tour of the serving table while Jones tended to other tasks: 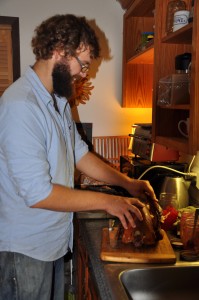 An hour or so later, most folks were looking for a place to rest. But there was the sustainable farm to see, and so a walking tour was organized – past tended fields of cover crops and a few late vegetables, and a squawking clutch of Rhodes Island Red chickens being grown to produce eggs.

The chickens live in a hutch and, next spring, will be released to wander freely in a fenced area. For now, they live in a hutch that protects them from errant hawks that have grabbed more than one of their predecessors before Jones built the hutch.

John Newton, Jones’ cousin, said the turkey was the dish that he found most remarkable.

Patrick Jones, Jones’ brother, joined in the festivities via Skype because he spent the holiday in Eugene, Ore., where he’s studying for his masters degree in music. Patrick Jones has tasted the homegrown food more than once, while helping his older brother on Babe + Sage and other farms.

“It all looked like a Thanksgiving Day meal, it looked like regular food,” Jones said. “When we were in North Carolina, we made sandwiches out of bread we kept and tomatoes and peppers we picked. There’s just no comparison to the flavor of something you’ve just picked.” 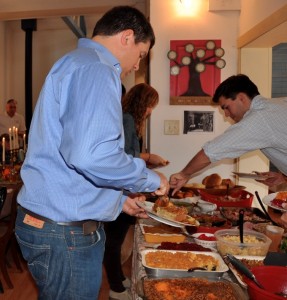 Simon Goodhead, who married into the family via Jones’ cousin, Bess, is an Englishman whose taste for Thanksgiving dishes is unmarked by memory.

“If you line them up next to each other, the meat is harder to tell, but with the vegetables there’s a bit more of a flavor difference,” Goodhead said.

Goodhead brings the perspective of an engineer, which he is by profession, and observed that he and Bess already have made the shift from traditional harvest to organic foods they think have fewer dangerous additives. He speculated this may be one reason the Thanksgiving dishes were not noticeably different from what he and Bess eat at home.

“I remember in maybe the late ‘90s, and certainly the 2000s, when organic foods began appearing and I thought, ‘What’s that? Why should I pay more for that?’,” Goodhead said. “Now more people are buying it, and the prices are pretty reasonable and the stuff tastes better. For example, if you get brussels sprouts from an organic farm and put them next to ones that are not organic, the non-organic ones are much bigger and their flavor is really bland. It’s not as ‘brussels sprouty’.”

After the crowd had thinned, Losh and Jones contemplated the Thanksgiving dinner they had just hosted. It was a special day for them, a real thanksgiving for all that they have achieved since they started Babe + Sage Farm.

What they started with was the old Oetter farm, once an anchor in the community because it had a train station. Trains still run on those Norfolk Southern tracks, on a feeder line that links Eatonton and Milledgeville and Gordon, the latter of which is on the main line between Macon and Savannah.

When the partners arrived, the farm had a driveway of sorts, leading from Nitrogen Road to where the house was supposed to be. The house was there, but hidden inside growth so dense that it amounted to privet fence that kept things out instead of in. Now, the grounds have been refurbished, the fields tended, and a brick oven is being built a short stroll from the house.

“There’s that French term, terroir, which means, ‘a taste of place,’” Jones said. “You definitely see that in the food. Even just from farm to farm in this area. Our kale and carrots and tomatoes are different, because of our growing conditions, our soil. And the intensity of taste.”

“It’s ruined us because it’s so fresh,” Losh said. “It’s impossible to get fresher food unless you stand in the field and eat it covered with grit. … When you’re a farmer, you eat like a king everyday.” 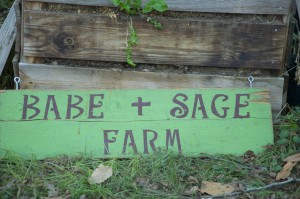 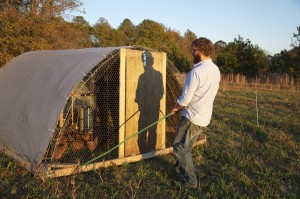 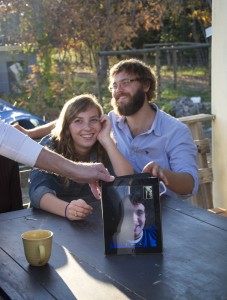 Living on the farm doesn’t mean living without high technology. Bobby Jones and his sister, Kate, talk with their brother, Patrick, on Skype via a wifi connection. Credit: Donita Pendered 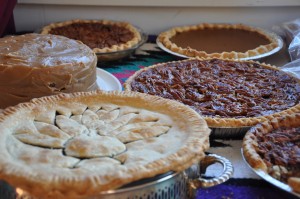