‘Baby Driver’ – a ‘sweet ride of a movie’ filmed in Atlanta 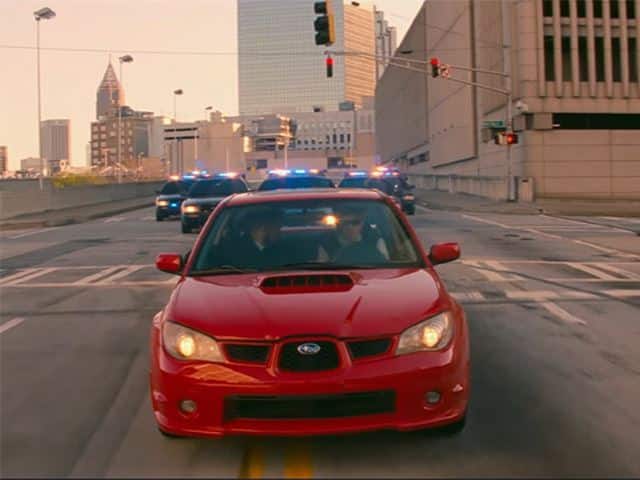 “Baby Driver” is one sweet ride.

Part of the fun is purely visceral: “Baby Driver” spins fantastical wheelies all over Atlanta. And unlike, say, the CGI mayhem in the  “Fast and Furious” franchise, these chases, crashes and exhilarating loop-the-loop thrills combine technical wizardry with the hands-on genius of a small flotilla of stunt drivers. 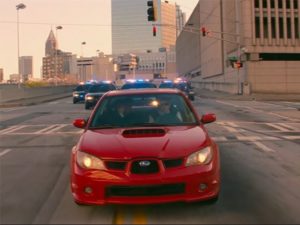 But “Baby Driver,” written and directed by Edgar Wright, isn’t all about automobiles. The picture crackles with the sort of insane profanity —passed off as everyday discourse — and creatively violent characters we haven’t experienced afresh since Quentin Tarantino first splattered “Reservoir Dogs” and “Pulp Fiction” across our collective movie consciousness.

Unlike Tarantino, Wright didn’t spring from the total anonymity of clerking at a video-rental store (remember those?). He has an actual — and enviable — track record. With fellow Brit Simon Pegg, he’s created some of the most original films of the last decade or so — most notably, their so-called Three Flavours Cornetto film trilogy: “Shaun of the Dead,” “Hot Fuzz” and “The World’s End.”

Still, as enjoyable as those movies were, nothing about them suggested that Wright had something like “Baby Driver” on the back-burner.

Basically, he makes it fun to feel like you’ve been run over.

Our protagonist (an unflappable and often unreadable Ansel Elgort) is actually named Baby.  And he is a driver — a getaway driver for Doc  (Kevin Spacey), an urbane criminal mastermind who specializes in bank heists and bon mots. 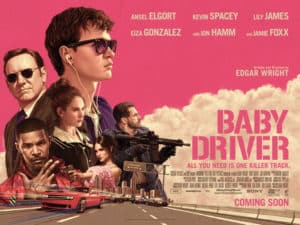 A movie poster of ‘Baby Driver’

The thing about Baby is, he’s wired. Not just intense, pedal-to-the-metal nervy.  He’s wired, literally. Thanks to a childhood trauma, he suffers from tinnitus. The only way he can function is with a playlist blaring in his head. And his incredible getaways are literally scored to that playlist.

Baby isn’t a crook by choice or by nature. He owes Doc money. He finally pays his debt, but as always happens in the movies, there’s one last job he has to do, like it or not.

Doc likes to change up his minions; it’s safer that way.  But he does use a few regulars. Buddy (Jon Hamm) and Darling (Elza Gonzalez) are like a cut-rate Bonnie and Clyde; for them, violence is a turn-on. Even more volatile is the aptly-named Bats (Jamie Foxx), a there-will-be-blood loose cannon who distrusts Baby’s stoic silence.

Thirty years ago, Johnny Depp might’ve played Baby. Elgort has the same sort of James Dean pout and cocky innocence Depp so smoothly appropriated. And he has that requisite dreamy romanticism, as evidenced in his connection with Debora (Lily James), a doe-eyed waitress who’s somehow on his wavelength. 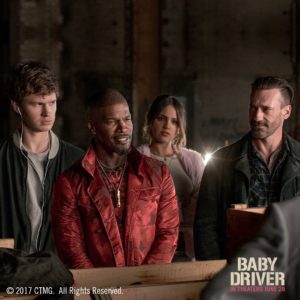 A scene from ‘Baby Driver’

Debora, alas, isn’t what you’d called a fleshed-out character. To her credit, James — she suggests the casual sultriness of a young Jessica Lange — does as well as she can in a role that’s straight out of a 1953 B-movie.

Granted, “Baby Driver’ is ultimately as cold and shiny as the tail fin of a late ’50s Cadillac. You root for Baby and Debora mostly because they’re the most palatable characters in a gallery of grotesques (enthralling grotesques, but still…). The thing is, sometimes, you just want an adrenalized  joyride —one that’s not mindless.

That’s what  “Baby Driver” delivers. It’s like “LaLa Land” meets Gun Crazy.” With an irresistible dollop of humor and a dazzling show-off style.