Baltimore, once a beacon for Atlanta’s downtown revitalization, sees its lamp dim 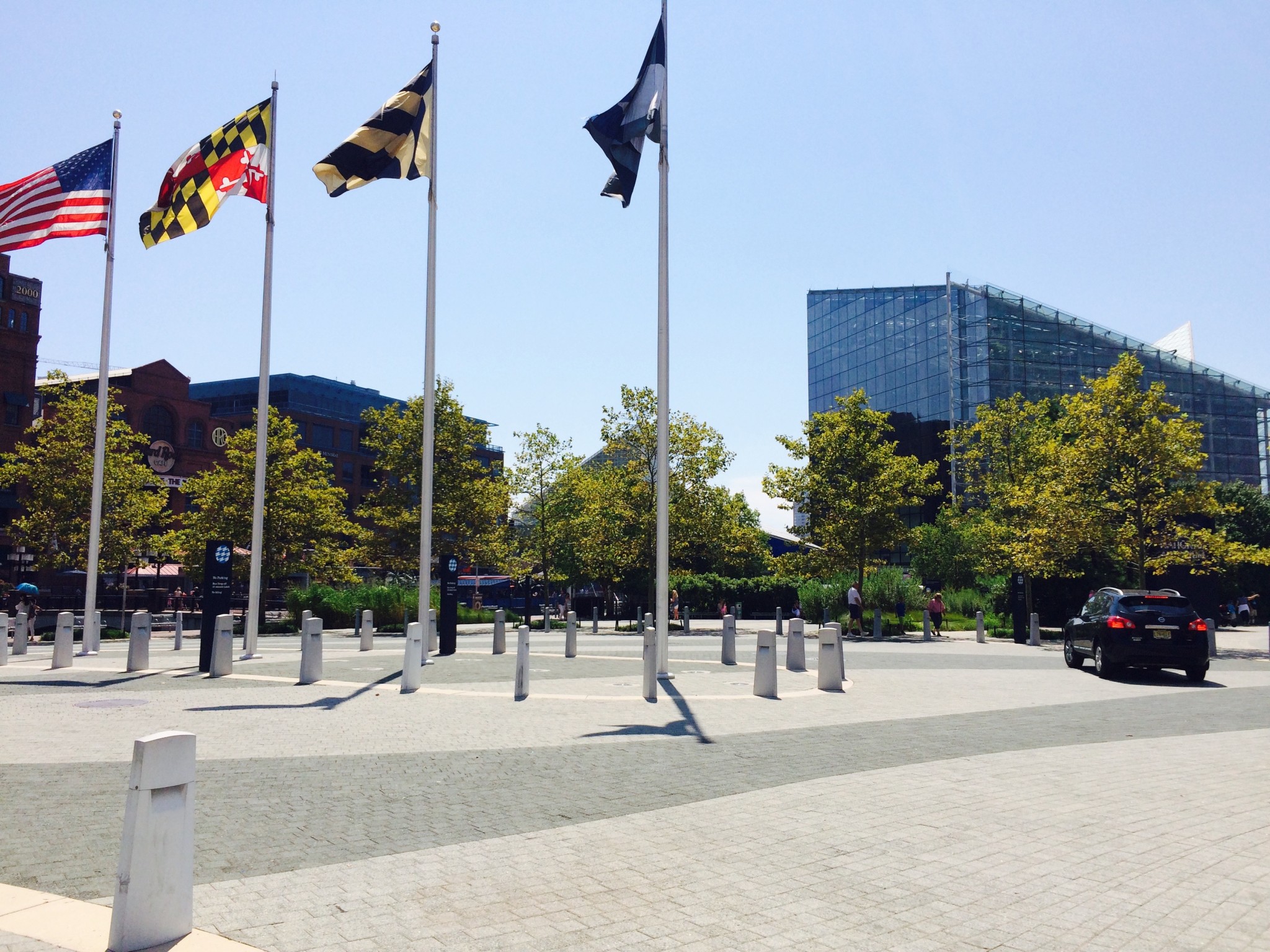 BALTIMORE – Once upon a time, Atlanta wanted to create the same kind of magic that enabled Baltimore to build a tourism destination around an aquarium. Those days seem long ago. 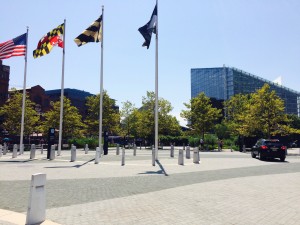 The entrance plaza to the National Aquarium was devoid of pedestrians and vehicles Sunday around noon, about three hours after the facility had opened. Credit: David Pendered

On Sunday, spacious walkways around the National Aquarium in Baltimore were mostly vacant. There was no queue at the aquarium’s main entrance. Outdoor cafes on an adjacent wharf were packed with empty tables; idle hosts beckoned passersby to step in for steamed crabs and other seafood treats.

It wasn’t always this way.

In the years before the Georgia Aquarium opened, in 2005, Baltimore’s Inner Harbor bustled. Harborplace, Baltimore’s version of Underground Atlanta, was crowded. Visitors flocked to the National Aquarium. The nearby Fells Point neighborhood, Baltimore’s version of Little Five Points, was emerging as a popular destination for folk art and tattooists. In 2009, Urban Land Institute named Baltimore, “the model for post-industrial waterfront redevelopment around the world.”

Recent years haven’t been kind to the Inner Harbor.

For starters, attendance at the main tourist destination – the National Aquarium – has been has been erratic since the Great Recession, according to various published reports that present information that seems internally inconsistent.

The National Aquarium in Baltimore self-reported about 1.37 million visitors in 2012. That figure doesn’t comport with a report from wbaltv.com and other Baltimore media. 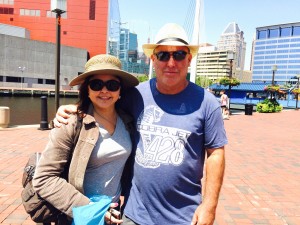 Mr. and Mrs. Steve Duffy, of Brazil, visited Baltimore’s Inner Harbor Sunday. They came despite concerns about the city’s homicide rate and civil protests in April, and plan to stay in the city’s tourist area. Credit: David Pendered

For these report to jive with the aquarium’s self-report, almost 1 million visitors would have to attend in the remaining six months of each reporting period. In addition, aquarium officials said that 2012 attendance showed the first increase since 2006.

Elsewhere in the Inner Harbor, a few cranes rise above two construction sites east of the harbor. Other parcels lay fallow as planned developments languish. Pleasure boating destined for the Inner Harbor is virtually non-existent, despite a plethora of dockage that’s priced below than car parks.

Baltimore’s homicide rate and civil unrest has to factor into the recent dip in visitation to the Inner Harbor. Steve Duffy and his wife knew about the troubles before they arrived Sunday from their home in Fortaleza, Brazil. They came anyway, largely because the airfare worked out so they could spend a few days touring Baltimore and Washington before heading to see friends and family in California. 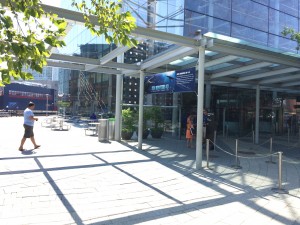 The National Aquarium recommends purchasing tickets well in advance of a visit, but around noon Sunday there was no wait to enter. Credit: David Pendered

“We heard about what happened with the riots,” Duffy said. “We’re here only two days and are not concerned. We’re not going to venture out of the tourist area, and Monday we go to Washington. We didn’t want to stay here too long.”

Baltimore’s homicide rate was 208 and counting as of Monday afternoon. Civil protests broke out in April over the death of Freddie Gray, who died a week after his arrest by Baltimore police. Police now are trying to get a handle on a surge in youngsters who gather on city streets in neighborhoods to race and perform stunts on dirt bike motorcycles that typically have been reported as stolen, according to media reports.

At the Georgia Aquarium in Atlanta, advocates hoped the aquarium would jump-start urban renewal in the vicinity of Centennial Olympic Park. They’re still waiting.

Development has been sluggish as the local economy sagged as a result of the Great Recession. Residential and commercial developers now seem to have shifted their focus to neighborhoods west of the future Falcons stadium. That said, the aquarium benefits from synergy from recently built attractions including World of Coca Cola, College Football Hall of Fame, and Center for Civil and Human Rights. 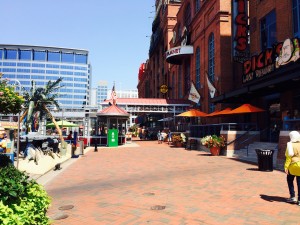 The restaurant row adjacent to the National Aquarium was mostly vacant at lunchtime Sunday. The facility, Power Plant Live!, has been a major destination. Credit: David Pendered

The record-high homicide rate in Baltimore this year certainly hasn’t helped spur visitation to its prime tourist and convention district, the Inner Harbor.

Most are gun deaths, though there are a fair number of deaths by stabbing and blunt force trauma, and even a few asphyxiations, according to reports by baltimoresun.com.

Baltimore’s homicide rate has increased by more than 33 percent, compared to 2014.

Atlanta’s homicide rate has increased by 19 percent but the numbers are vastly different – 57 year-to-date in 2015 compared to 48 for the same period in 2014, according to a report by the Atlanta Police Department.

Baltimore’s tourist district is a bubble of safety. Homicides occur in neighborhoods surrounding the Inner Harbor. The harbor and downtown business district exist in a bubble shaped like a light bulb, with the screw end at the National Aquarium and the bulb spreading up into comfortable neighborhoods due north of the Inner Harbor, according to the crime map posted on baltimoresun.com. 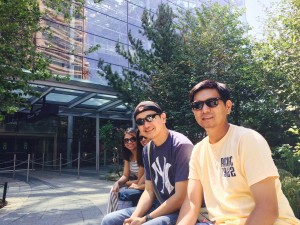 As a visitor from central New Jersey observed Sunday:

A shirtless young man peddled a bike along a causeway near the National Aquarium’s front door. He wore ear buds and quietly sang lyrics that seem to be from the 2013 album, Downtown: Life Under the Gun. The song is the fourth track on an album produced by Def Jam Recordings. The album cover contains an advisory for explicit content.

A few apparent tourists turned their heads to watch, and returned to their conversations.

A number of folks visiting Baltimore’s Inner Harbor on a brilliant afternoon said the killings didn’t scare them away. Their comments sound a bit hardened toward the prevalence of urban violence and social mores.

“I saw the news when we got here and saw three shootings right away, and I said, ‘This is just like Newark’,” said Ron Marzan, who said he’d traveled from central New Jersey to Baltimore for a weekend trip with family and friends. “Most seem to be young teenagers, like children. It’s gang related.” 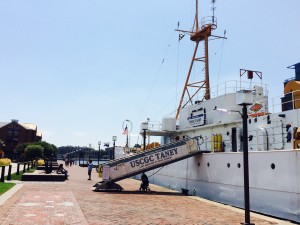 The last survivor of Pear Harbor, USCGC Taney, attracted interest from one family around 1 p.m. Sunday afternoon. The wharf was all but vacant. Credit: David Pendered

Marzan and Perez were traveling with their families, and waiting outside the aquarium for Perez’ son to finish the dolphin tour. Perez said he likes what he’d seen of Baltimore.

“Compared to San Francisco, this area is better,” Perez said. “San Francisco stinks a lot because of the bums. They pee anywhere.”

Pee stink or not, on Sunday there were no crowds on sidewalks and plazas near the National Aquarium. The sense of solitude stretched to the main doors of National Aquarium; to Harborplace, a retail district built by the company that renovated Underground Atlanta, Rouse Co.; and Power Plant Live!, a former power plant that was shuttered in 1973 and repurposed as a commercial center.

Weather wasn’t keeping folks home – skies were clear and a light breeze tamped the effect of a heat index of 90 degrees. A tax-free shopping week for back-to-school items was wrapping up, but it had been underway for a week. The Orioles baseball game didn’t absorb the crowds, given that TV coverage showed acres of empty seats in a 1:35 p.m. game in which the Orioles defeated the Oakland A’s by a score of 18-2.

Previous Article
Finding Hope through the Eyes of a Buruli Ulcer Patient
Next Article
J-Js go the way of the smoke-filled room, without a new name for them