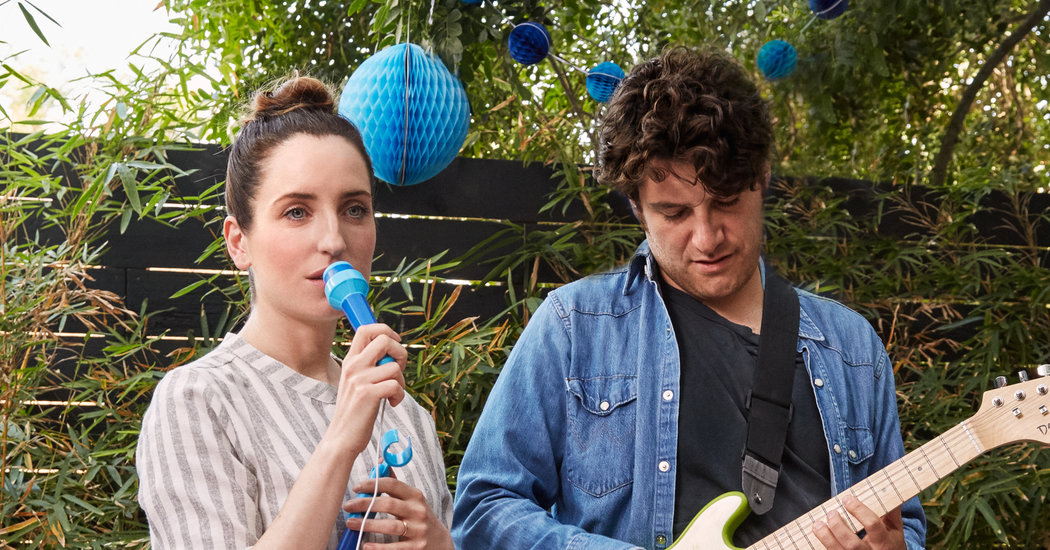 HE: Why did you call me a liar?
SHE: Because you lied.
Welcome to “Band Aid,” a kind of millennial spin on the sort of death-match marriage laid out with such venom and heartbreak and cutting-edge humor in Edward Albee’s “Who’s Afraid of Virginia Woolf?”

Anna (Zoe Lister-Jones) and Ben (Adam Pally) are one of those couples who make their friends nervous. When they’re good, they’re pretty spectacular. 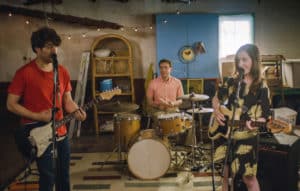 But when they are bad…. head for the hills.  Like Albee’s George and Martha, they know all the buttons to push and just how to push them.
Then something unexpected happens. At a toddler’s birthday party, they playfully start jamming on some kiddie musical instruments. And they enjoy it. And…they enjoy each other.
Eureka! (so to speak).
Anna and Ben decide to turn their monumental fights into monumental songs.  What was once toxic is now…maybe…a way to spring themselves from their dead-end jobs (she’s an Uber driver; he’s a freelance graphics guy). And maybe turn their marriage around.
“I’m in no mood for your mood,” sings one.
“You’d better change your attitude,” sings the other.
The thing is, the better they get along, the harder it becomes to create new songs.
A mere plot summary sounds glib, but the movie itself is anything but. Consider the supporting cast: a deadpan Fred Armisen (“Portlandia” and “SNL”) as the weird neighbor — Cocoa Tuesdays, anyone? —who becomes the band’s drummer, and Susie Essman (“Curb Your Enthusiasm”) as Ben’s mom, tasked with the last-act Insightful Monologue that pulls everything together (a tough job she manages beautifully). 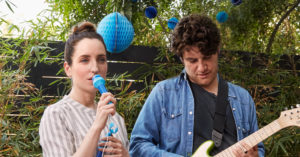 Still, Pally and Lister-Jones are the movie’s bitingly brilliant center..  They have an amazing chemistry — especially when put in service of bad chemistry.  The way they lock eyes over a sink overflowing with dirty dishes is priceless. That they later decide to name their band Dirty Dishes is just icing on the cleverness.
“Band Aid” is scenes from a marriage in a minor key, one of those films that makes you laugh out loud, then, with savage relish, suggests that what’s just happened isn’t all that funny. The dialogue is lacerating and hilarious. The emotional acuity is chilling. And the picture even dares a dangling-participle finale, one that whispers rather than screams.
And here’s the kicker: Lister-Jones not only stars; she’s also the writer and director. Just what she’s been doing and why we haven’t heard more about her is perplexing. Hopefully, “Band Aid” will change all that. For my money, she’s the summer’s other Wonder Woman.
Share2
Tweet
Share
Pin
Pocket
WhatsApp
Buffer2
Email
Reddit
4 Shares
Tags:

Previous Article
Rural Georgia’s slippage marked by credit downgrade at Coffee County campus
Next Article
Does the future look like the Better Care Reconciliation Act, or the Healthy California Act?