Paul H. Taylor was one of those people who spark the best in a community, and kept that spirit lit. With the Oak Grove United Methodist Barbecue, the Taylor fire is real and smokin’. 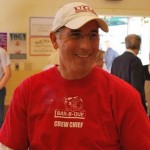 For a half-century, this big church in northeast Atlanta has roasted three tons of pork to feed 5,000 people. For side dishes, we’re talking 440 gallons of Brunswick stew, 900 pounds of coleslaw, 455 bread loaves and 5,408 bags of chips. Putting this on takes between 400 and 600 volunteers.

An event so large and significant (the barbecue benefits 26 projects in the church, community and mission fields, and was noted in the New York Times) needs a strong volunteer leader. For the past decade, Taylor served as “Boss Hog.”

Taylor will be missed at Saturday’s 51st barbecue, which takes place from 11 am to 6 pm. He died at age 53 in an April bicycle accident on North Decatur Road. (If you’re among the thousands of commuters who use that artery, you may have seen the “ghost bike” memorial at Superior Avenue that marks his passing.) 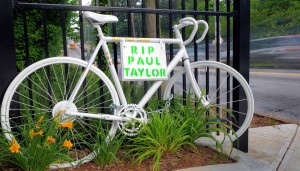 A ghost bike sits at the corner of Willivee Drive and North Decatur Road in remembrance of Paul Taylor, who was killed April 30 while riding his bike very close to this location. Photo was taken the morning after the memorial was installed, shortly following the accident. (Credit: M. CHRIS HUNT/chuntimages.com)

To use a bicycling term, most of us draft off neighbors like Taylor. In our hesitation to volunteer, this father of two teenaged daughters and two adult children would have already stepped up to coach the soccer team, go on the mission trip or train for a triathlon. After a work day as a physician’s assistant at Grady Memorial Hospital, his service to others was just getting going.

His tough exercise regimen, which included swimming and running, gave him energy for maxing out his time. His pace, enthusiasm and charisma pushed others around him to pitch in, too.

“He was the type of person who didn’t want to just sit in the pew; he wanted to get involved… he wanted to seize life,” said his wife Barbara Hathcock Taylor, a member at Oak Grove since high school and who married Paul there in 1995. “He was very persuasive, not very good at taking no for an answer.

“He just had that thing about him that when he asked someone to do a job, no one could turn him down,” said Clayton Webster, publicity and tickets chair for the barbecue and church member for three decades. “It takes over 400 volunteers to run the barbecue, and Paul was the master recruiter. He also excelled in getting the right person in the right place to get the job done.”

His untimely death highlighted all that Taylor contributed to the barbecue, which serves as a template for anyone in management. Webster offered these observations, with some help from Barbara Taylor: 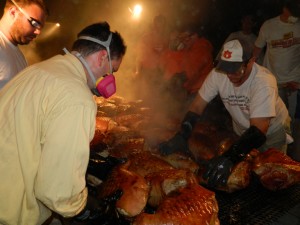 ·    Don’t wait for the perfect time to volunteer. Taylor agreed to chair the barbecue around the birth of his youngest daughter. It would have been easy to use that as an excuse.

·    Be prepared for the unexpected. Taylor’s mentor in ordering supplies for the barbecue died unexpectedly. The mentor kept a folder of tasks and how to do them, which Taylor used and improved upon.

·    Plans create stability. Under Taylor, the barbecue settled into the same annual date, the third Saturday in October. “He was one of the biggest Georgia Bulldogs fans I know, and we used to try to jockey the barbecue around UGA games,” Webster said.

·    Inspire in a genuine way. “Everything is a once in a lifetime experience,” was Taylor’s favorite expression.

·    Enlist, support and praise trusted lieutenants. Taylor recruited a team of “crew chiefs for life,” and made them feel important and needed. Each wore a red apron, and for the 50th barbecue in 2011, a special T-shirt. He also had a hardback keepsake book made with a personal message to each crew chief about their special role in the barbecue’s success. “Before Paul, getting the crew chief lined up was an annual headache,” Webster noted.

·    Roll up your own sleeves. Taylor canvassed the neighborhood for donations to offset rising expenses. He worked with Oak Grove Market and Atlanta Meat Co. to get the best prices on supplies, and other companies to donate charcoal.

·    Get creative. Along with the book, craft and bake sales that went along with the barbecue, Taylor added a praise band and bluegrass band. The music helped create a more festive atmosphere that encouraged people to enjoy the church longer.

·    Honor and value experience.Not long after each barbecue, Taylor would host a steak dinner to review what worked well and what needed improvement. “The planning for the next barbecue started the minute after the last one was finished,” said Barbara Taylor. “The size of containers, how to cook the meat, when to start cooking, the size of the portions – he was always in the process of making it more efficient.” 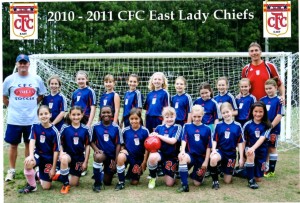 So now we know how Taylor helped sustain and popularize the barbecue. But why did he put so much into his community?

His obituary noted his personal spiritual principle: “Unless a man undertakes more than he possibly can do, he will never do all that he can.”

His wife pointed to Taylor’s background. The youngest of three brothers, Taylor was the first in his family to go to college.

At Augusta College, he met a doctor who became a mentor and encouraged Taylor in the medical field. While he dreamed of being a doctor or surgeon, he ended up becoming a physician’s assistant. At the time of his fatal accident, he had just finished his first semester toward a master’s degree.

“He had a little chip on his shoulder,” Barbara Taylor said. “He wanted to be more than what he had seen growing up, and he liked the feeling of helping people.”

To humanize Taylor, I asked his wife about any downside to him doing so much. She took a while to think before answering. 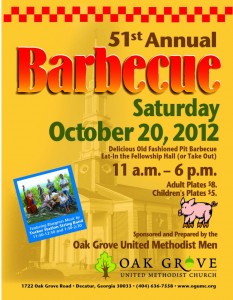 “He tended to overcommit,” she said, especially in his athletic workouts. “He was never satisfied with not preparing as much as he could. Family often took a back burner… He had a hard time sayig no when someone asked him for his time, money and help with a project.”

Since his death, his feisty spirit has inspired his family to continue seizing life as he did. That trait turned up recently in the personality of his daughter Kelley, now 15.

The family was talking about whether they would attend the barbecue. They had hosted a planning meeting on what would have been the couple’s 17th wedding anniversary.

Barbara Taylor offered to take Kelley and her sister Grace, 11, out of town.

“But the barbecue has been part of my life my whole life, and I don’t want to miss it,” Barbara Taylor heard Kelley say.

The family agreed to follow her to the barbecue, which fires up Saturday as a tribute to Paul Taylor’s servant leadership.