Beer and wine sales: Yes to Starbucks; No decision on package sales at CVS at Peachtree Center

This story has been updated to correct the days the CVS pharmacy is open.

Starbucks will be allowed to sell beer and wine at two locations in Atlanta, but a controversial request by CVS to sell package beer and wine at a new store in Peachtree Center remains in limbo. 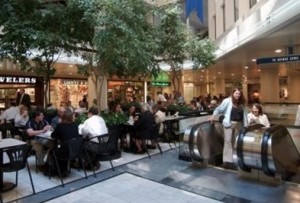 CVS has applied to sell packaged beer and wine at its new store in Peachtree Center. Credit: Parkway Properties

Atlanta’s License Review Board has approved permits for Starbucks to sell beer and wine for on-premise consumption at stores at near the OK Cafe, at 1230 West Paces Ferry Road, and near the Walmart on I-75, at 1801 Howell Mill Road. The permits will be issued unless they’re denied by Mayor Kasim Reed.

The board took no action on the CVS proposal for a permit to sell beer and wine for off-site consumption. CVS wants to sell package alcohol at the struggling Peachtree Center, which leasing sheets show has been 42 percent vacant. CVS didn’t have a representative at the meeting and the item wasn’t called for discussion.

CVS’s designated spokesman for the application, Mike DeAngelis, who’s CVS’s public affairs director for retail operations at the corporate office in Woonsocket, RI, did not return a call Friday.

The CVS request has generated conversation among some downtown advocates who don’t want to see more packaged alcohol shops in the central business district.

One concern is that additional package alcohol sales will enable, if not attract, individuals who whose consumption patterns and behaviors detract from efforts to make the area more attractive to visitors to downtown attractions, and to downtown workers and residents.

Another concern is the effect that package alcohol sales could have on an area that is becoming Atlanta’s front door to tourism destinations around Centennial Olympic Park – including the Georgia Aquarium, World of Coca Cola, and the Center for Civil and Human Rights that’s now under construction.

The MARTA station at Peachtree Center has become a popular alternative for some riders seeking to avoid the bustle of MARTA’s Five Points Station as they commute to the park.

CVS has applied for a beer and wine permit for what amounts to a convenience store with a pharmacy in the Mall at Peachtree Center, at 231 Peachtree Street. The store faces Peachtree Street from the site where Brooks Brothers once sold apparel.

The store is to be open daily from 7 a.m. to 10 p.m., though the pharmacy is open fewer hours and closed on Sundays. Shelves are stocked with groceries, over-the-counter medications, health and beauty aids.

The Mall at Peachtree Center is struggling to attract and retain tenants, according to leasing information available from Parkway Properties.

The CVS lease filled almost a quarter of the vacant space – 11,960 square feet, according to the address on the alcohol application (suite C-24) and the leasing information provided by Parkway Properties. A report by ajc.com quotes a leasing agent who said the store will fill 13,000 square feet.

In December, Starbucks announced that it would expand the alcohol sales to five other cities in an expansion of the market test.

The business strategy is to sell alcohol beverages starting at 2 p.m., in an effort to attract customers who are winding down their work day. For example, Starbucks is reaching out to groups that may include folks who want a glass of beer or wine and others who want a cup of coffee.