Maybe “Once” was enough for writer/director John Carney.

The Irish filmmaker’s low-key 2006 movie was a surprise hit in the U.S.  — so much so that it was subsequently turned into a successful Broadway musical, also called “Once.”

Not that his sophomore effort, “Begin Again,” is all that bad.

It isn’t. But it lacks the considerable offbeat charm of its predecessor.

Like “Once,” “Begin Again” is about music and musicians. Unlike “Once,” it is not a romance; British singer/songwriter Gretta (Keira Knightley) and genius-but-a-has-been music producer Dan (Mark Ruffalo) make sweet music together, but that’s all. 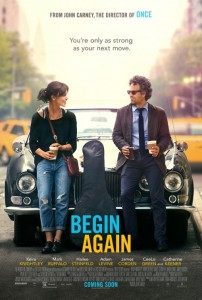 Both have bumpy backstories. Gretta arrived stateside as the girlfriend/sometime musical partner of a rising star (Sexiest Man Alive…I guess… Adam Levine). When his star supernovas, he heads for L.A. without her, where he finds a new look and a new girl.

Dan was once a power in the music industry, launching star after star. But that was seven years ago. Now, he’s an alcoholic who’s lost his job, his wife (Catherine Keener) and their daughter (“True Grit’s Hailee Steinfeld).

Our protagonists’ stories eventually dovetail into the movie’s best scene: When Dan hears Gretta play at an out-of-the-way club.

First, we see the scene through her eyes. A college buddy finishes his set and coerces Gretta to come on stage. She sings pleasantly enough, but the audience pointedly takes no notice.

Then we see her performance from Dan’s point of view.  Slumped over the bar, he perks up when she begins. He then goes to the front of the otherwise indifferent crowd and “hears” her as he would produce her — with piano, drums, guitars, strings, all played by invisible musicians. It’s the movie’s sole magic moment.

Carney strives for several more: the pair walking around Manhattan sharing their play lists or recording on the run in authentic locations all over the city (That’s the album’s hook).

Somehow, none of it quite gels. There’s no need for a romance — actually, I applaud Carney for avoiding that cliché — but nothing seems to evolve between Gretta and Dan.

Well, gratitude perhaps and mutual admiration and the inevitable New Beginning (Again). But if you ever saw “National Velvet” with Elizabeth Taylor as the horse-crazy girl and Mickey Rooney as her trainer, well, that’s what non-sexual passion looks like.

Still, film’s biggest problem is as obvious as its accents. Manhattan has its own special magic, but if you want to talk purely pixilated — which is what this picture tries to be — best stick to Dublin.