‘The Beguiled’ – movie suffocates from too much estrogen 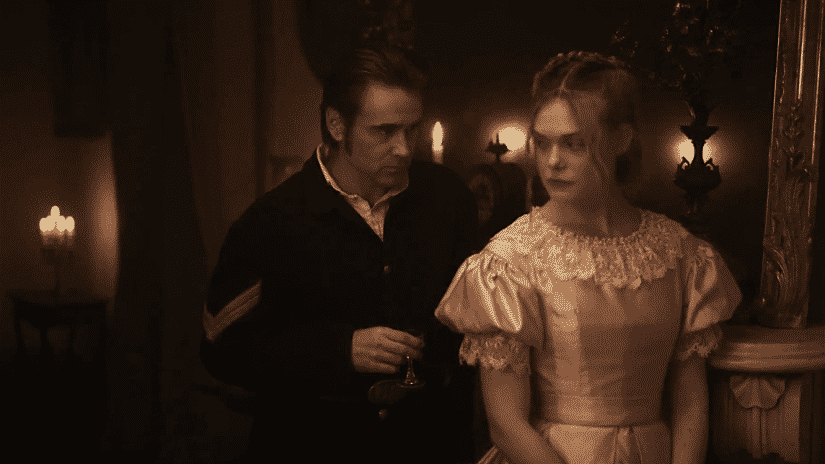 A scene from "The Beguiled" movie

Share8
Tweet
Share
Pin
Pocket
WhatsApp
Buffer2
Email
Reddit
10 Shares
By Eleanor Ringel Cater
Though based on the same book by Thomas Cullinan, Clint Eastwood’s “The Beguiled” (released in 1971) and Sofia Coppola’s current version couldn’t be more different.
Eastwood’s picture, directed by fellow macho-man Don Siegel (remember, this is the Eastwood of “Dirty Harry,” not “Million Dollar Baby”), had a kind of leering Gothic misogyny. Coppola’s film, which made her only the second woman ever to win best director at Cannes, offers a gauzier female gaze — rustling petticoats and repressed desire. 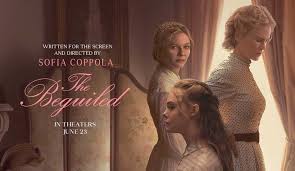 A poster of Sofia Coppola version of ‘The Beguiled’ movie

If, gun-to-my-head, I had to choose which one to sit through again, I’m afraid I’d have to go with the boys. They may treat women with ugly condescension, but they’ re clearly having more fun.
Not that there’s no fun to be had in Coppola’s picture; her trademark deadpan humor, especially when applied to gender issues, often peeks through the fecund Spanish moss and panting female ensemble. But mostly, it’s pretty tough going.
The plot is simple. It’s 1864 and 11-year-old Amy (Oona Laurence), a student at a decaying Virginia girls school that’s somehow still standing despite the Civil War raging a few miles away, is out picking mushrooms for dinner. She stumbles (almost literally) on John McBurney (Colin Farrell), a Yankee soldier with a badly wounded leg. He convinces her to bring him back to the school.
He is taken in — reluctantly — by the school’s headmistress, Miss Farnsworth (Nicole Kidman). She props him up in the parlor and tends to his injury (her ministrations include sponging his near-naked body while he’s passed out). She also, with the approval of her second-in-command, the primly buttoned-up Miss Edwina (Kirsten Dunst), decides not to hand him over to the Confederates. At least, not yet.
The presence of a male in their otherwise estrogen-soaked world has a considerable effect.  Soon everyone is dressing up for dinner and taking catty shots at each other.  McBurney clearly enjoys — and soon exploits — his fox-in-the-henhouse power, cannily playing his hostesses against each other. But as the title suggests, things may not be as they seem. Just who is beguiling whom? 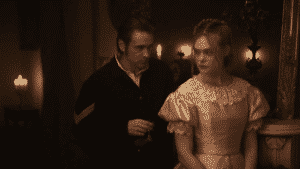 A scene from “The Beguiled” movie

Coppola expertly captures that sorority-house mentality in which “sisters” would rather cut each other’s throats than relinquish the in-residence male’s full attention. In one of the best scenes, McBurney remarks on a tasty slice of apple pie. I baked it, says one. Based on my recipe, says another. I picked the apples, chimes in a third. It’s my favorite, too, offers a fourth.
It’s very funny; it’s also slightly ominous.
That funny/ominous tone is what the film aims for throughout. But the inherently melodramatic material stubbornly resists that sort of multi-leveled sophistication.
Coppola’s eye remains as keen as ever. Many of her dreamy compositions recall Julie Dash’s “Daughters of the Dust.” Seated together for evening prayers, sinking into their voluminous crinolines, the women inadvertently suggest a circle of slowly deflating balloons.
As the mood gradually transitions from hushed to airless to suffocating, the picture seems to drown in its own hothouse femininity. We long for just a taste of the sharp wit Coppola offered so effortlessly in “Lost in Translation.”
Maybe that’s what this movie needs. Bill Murray.
Share8
Tweet
Share
Pin
Pocket
WhatsApp
Buffer2
Email
Reddit
10 Shares
Tags: