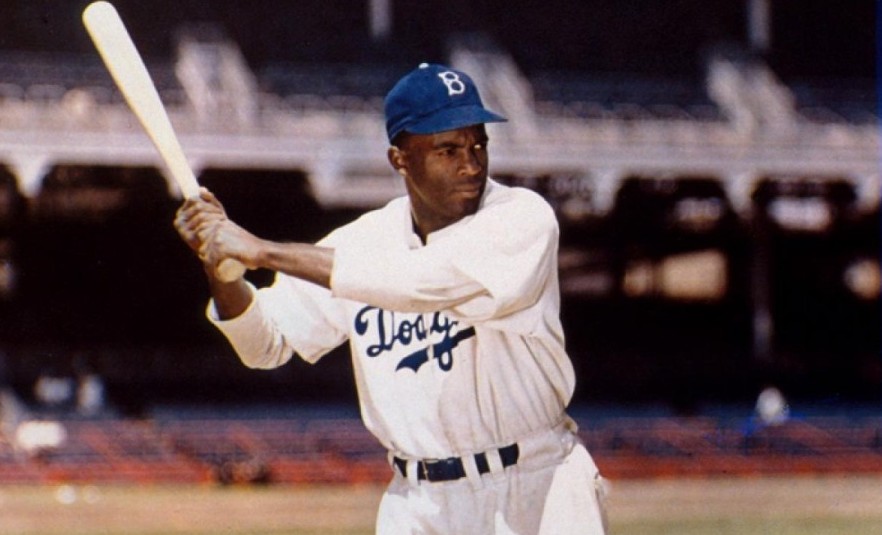 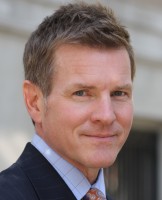 For most of us, being first is something we long for. Americans like being first in everything. But what if being first means having people hate your guts?

After World War II, Brooklyn Dodgers president and general manager Branch Rickey wanted to increase attendance and make his team better. Every team president wanted to do that. But the thing Rickey had in mind seemed downright radical. He wanted to break baseball’s color barrier and put a black baseball player on the Brooklyn Dodgers. A dangerous piece of social engineering, to be sure. That same year, 1947, the Memphis Censorship Board banned the movie Curley because it showed black and white children playing together. 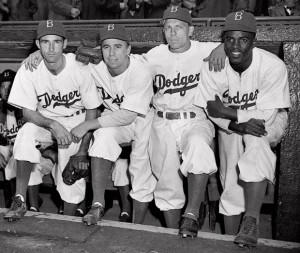 It would take a rare individual, someone who could take the most vile abuse imaginable and turn the other cheek. Someone who could psychologically endure loneliness and extreme public persecution while simultaneously being a very good baseball player. History had summoned Jack Roosevelt Robinson.

Jackie Robinson was born in Cairo, Georgia, on January 31, 1919. His mother, abandoned by her husband, moved the family to Pasadena, California, in 1920, and Robinson eventually became an outstanding athlete at UCLA. Robinson showed early that he was not afraid to stand up to bigotry. Drafted into the army in 1942, Robinson boarded a bus at Fort Hood, Texas, and the driver ordered him to sit in the back. Robinson refused and faced a court martial. The order was ruled a violation of army regulations, and he was exonerated. Shortly after leaving the army in 1944, Robinson joined the Kansas City Monarchs of the Negro Leagues. 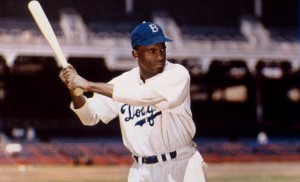 When Branch Rickey signed Robinson and brought him up to the big leagues in the spring of 1947, baseball’s “great experiment” electrified America. Robinson trailed only Bing Crosby in a year-end national popularity poll. At season’s end Robinson was named the league’s Rookie of the Year (an award that now bears his name). Three years later he won the batting title, was named Most Valuable Player, and led the Dodgers to the World Series. Over a ten-year career he hit .311, and played in six all-star games and six World Series. He was voted into the Baseball Hall of Fame in 1962. It sounds like he won American Idol. But this is to sum up a year and a career, and we don’t live our lives like that. We live out each minute and each hour, sometimes in excruciating pain. For Jackie Robinson, 1947 was an entirely different experience, a hell on earth.

In a now-legendary meeting, Rickey confronted Robinson with the wide range of abuse he knew Robinson would face. Robinson listened and grew visibly angry. “Do you want a player afraid to fight back?” he shouted. No, Rickey replied, he wanted someone even tougher than that, someone, he said, “with the guts not to fight back.” Restraint would be the measure of his courage. Robinson agreed that for three years, he wouldn’t fight back. He would simply take it, and all the while he would try to perform at the highest level. 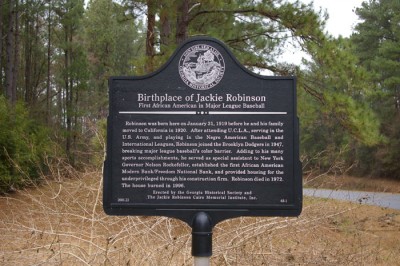 Marker on the site of Jackie Robinson’s birthplace. Credit: GeorgiaInfo

It began with members of his own team. In spring training, Dodgers manager Leo Durocher squelched plans for a players’ petition against Robinson during a midnight meeting. When the team went on the road, Robinson had to stay in different hotels and eat in separate dining rooms. After the start of the season, some of the worst abuse came from players on opposing teams.

Phillies manager Ben Chapman from Alabama told his players to taunt and bait Robinson with all they had, “to see if he can take it.” There were references to thick lips, thick skulls, and syphilis sores. The stands rained down with tomatoes, rocks, watermelon slices, Sambo dolls, and the most vile things you could ever say to another human. It did something even to Robinson’s teammates. Dodger Eddie Stanky — also from Alabama — had enough. He called Chapman a coward and told him to pick on someone who could fight back. In Cincinnati, Dodger shortstop Pee Wee Reese, a Kentucky native, put his arm around Robinson’s shoulder to show his support for his teammate, a hugely symbolic moment. Rickey later remembered that racists like Chapman actually brought the Dodgers together as nothing else could. “He unified thirty men, not one of whom was willing to sit by and see someone kick a man who had his hands tied behind his back.”

Robinson bore it all with grace and dignity. He did it, he said later, for his mother, who had kept his family together after being abandoned by his father; for his brothers, who never got this kind of chance; for Branch Rickey, who displayed enormous courage himself; and for all the ones who would come after him. This was a man whose life provided a foundation upon which so many others would build. 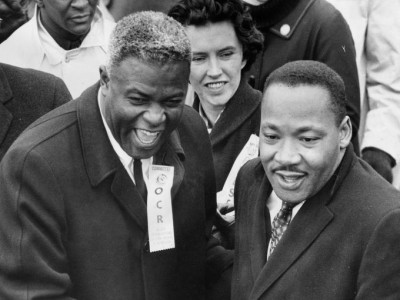 Though Robinson left Georgia as an infant, his influence here remained strong. He returned to Georgia in 1949 to play with the Dodgers in exhibition games against the all-white Atlanta Crackers before sellout crowds at Ponce de Leon Ballpark, and again in 1962 at the request of Martin Luther King Jr. to speak in Albany at the height of the Albany Movement. His influence on home-run king and long-time Atlanta Braves player Hank Aaron was profound. Aaron calls Robinson a hero and credits Robinson’s example as the reason he actively supported civil rights during the 1960s and ’70s, even when other prominent black athletes did not. In 2001 the Georgia Historical Society placed a historical marker at the site of Robinson’s birthplace near Cairo.

It is Jackie Robinson’s name we remember today, not those of the small men who taunted him. He was just a baseball player, albeit a great one, but he was so much more than that. Robinson was a brave and courageous man, one of those rare souls who, when the great question is asked, “Who will go first?,” didn’t avert his eyes or walk away. He stepped forward and said, “I will.” A man willing to expose himself to a disease so that the disease can be eradicated. When he took the field on April 15, 1947, and kept taking it, he didn’t just make the Dodgers better. He made the human race better. “I’m not concerned with your liking or disliking me,” he said. “All I ask is that you respect me as a human being.”

The rock in the water that was Jackie Robinson’s life will continue to ripple for generations to come.

Stan Deaton is the Senior Historian and the Dr. Elaine B. Andrews Historian at the Georgia Historical Society. He can be reached at sdeaton@georgiahistory.com.