Kenneth Branagh has bathed his memory film “Belfast” in a nostalgic patina of black-and white. Alas, that’s not enough to give his heartfelt picture the emotional heft he intends.

Set in 1969, “Belfast” is all about the troubles – make that The Troubles – that pitted Catholics against Protestants and tore Northern Ireland apart in the ‘60s and ‘70s. Branagh lived there as a boy before his family moved to England and witnessed firsthand the irrational intolerance and needless bloodletting that characterized the times. 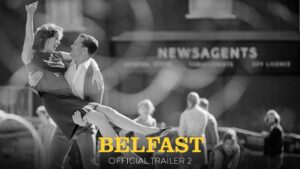 His alter-ego is Buddy (adorable Jude Hill), a high-spirited nine-year-old who can’t understand why he mustn’t like Catholics anymore (he lives in a mixed neighborhood). Nor can he fathom the increasing tensions between his father (Jamie Dornan) and mother (Caitriona Balfe). At least his dear ol’ grans (Ciaran Hinds and Judi Dench) still seem steady, though grandda’ may be having health problems.

However, while the challenges the family faces may pale beside the increasingly violent confrontations between Catholics and Protestants, the two problems are also inextricably intertwined. Dad is a charmer who has trouble managing money (translation: he has a gambling habit). A bigger job and better opportunities beckon from England.  Can – should – the family leave the only place they’ve ever known?

But the armed British soldiers and rolls of barbed wire closing off streets suggest this is no longer the neighborhood where they grew up. 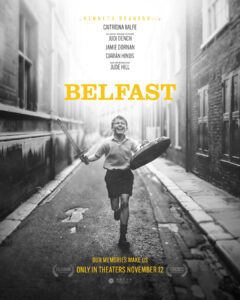 Like most memoirs, “Belfast” is episodic. Buddy gets to go to the movies (“Chitty Chitty Bang Bang.”) Buddy gets a crush on a Catholic girl at school. Buddy gets mixed up in robbing a local candy store. Panicked, he takes Turkish delight, a candy nobody likes – a nice touch.

There are, in fact, several nice touches in “Belfast.” The way miniskirts and Van Morrison turn up in what would otherwise seem like a movie set in the ‘30s or ‘40s. The genuine affection between Dench and Hinds, Dornan and Balfe. Hill’s glowingly naturalistic performance.

But overall, the movie is a wash; forced nostalgia tricked out in rose-colored blarney and sprinkled with Angela’s Ashes. Nothing truly feels at stake, not even our brave little family or their unlucky home place. If you want to see this sort of thing done right – done brilliantly – check out director John Boorman’s 1987 picture, “Hope and Glory,” about a boy living in London during the Blitz.

“Belfast” currently is showing in movie theaters, and it’s available on video on demand.