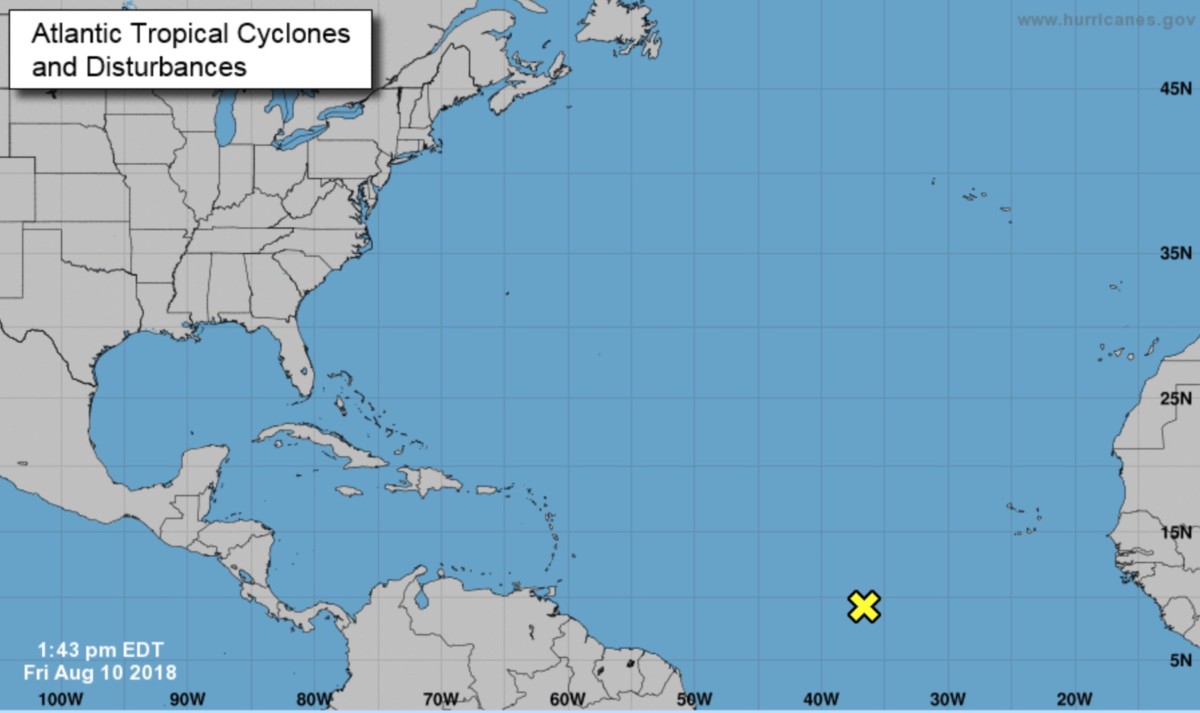 Federal weather forecasters have lowered their prediction for hurricanes in the Atlantic Ocean this year, which is welcome news in Georgia as water levels in many rivers and lakes are at or above normal and recovery continues from last year’s Hurricane Irma. 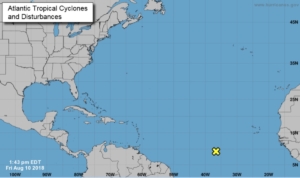 That being said, hurricane trackers are monitoring a disturbance that’s now about midway between Africa and the Lesser Antilles. The system is expected to move westward early next week. The potential storm is given a 20 percent chance of becoming a cyclone over the next five days.

The National Oceanic and Atmospheric Administration announced Thursday that weather conditions are likely to produce fewer hurricanes than were predicted in May.

Chances of a below-normal Atlantic hurricane season were raised to 60 percent, up from the 25 percent forecast issued in May.

The likelihood of an above-normal hurricane season was reduced to 10 percent from 35 percent, according to seasonal forecasters with NOAA’s Climate Prediction Center.

In addition, not all the hurricanes that may occur are expected to make landfall. Landfalls are determined by short-term weather conditions that can be predicted no more than about a week ahead, NOAA said.

NOAA emphasized that residents should remain prepared to face gale- and hurricane-force conditions, even though the forecast has improved.

“There are still more storms to come – the hurricane season is far from being over,” Gerry Bell, lead seasonal hurricane forecaster at NOAA’s Climate Prediction Center, said in a statement. “We urge continued preparedness and vigilance.”

Steady rainfall this year has resulted in several lakes being at or slightly above their summer levels, according to the National Weather Service.

That’s the case on Friday morning for two lakes that provide water for metro Atlanta: 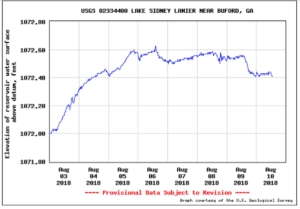 Lake Lanier continued to rise this month and is above its summer level of 1,071 feet above sea level. Credit: waterwatch.usgs.gov

The Flint River is flowing much above normal at a station near Montezuma.

The Chatthoochee River is flowing at rates much above normal at stations near Fairburn, West Point and Columbus, according to the USGS map.

Drought conditions exist at no locations in Georgia, according to the weekly drought report issued Thursday by the U.S. Drought Monitor.

When Hurricane Irma came ashore last year, Georgia suffered more than $550 million in property losses, according to an Oct. 12, 2017 statement from Georgia Insurance Commissioner Ralph Hudgens. Insurers had reported more than 103,000 claims in the month since the storm arrived in Georgia.

The estimate was based on claims data reported by property and casualty insurance companies. It includes damage to homes, vehicles and businesses. It does not include flood damage to businesses and homes because most flood insurance is offered through a federal program, not through insurance companies, according to the statement. 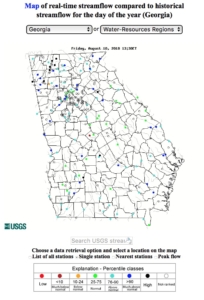 The green, turquoise and blue dots spread across Georgia mark the location of streams that are flowing at or above the historical stream flow for today. Credit: waterwatch.usgs.gov