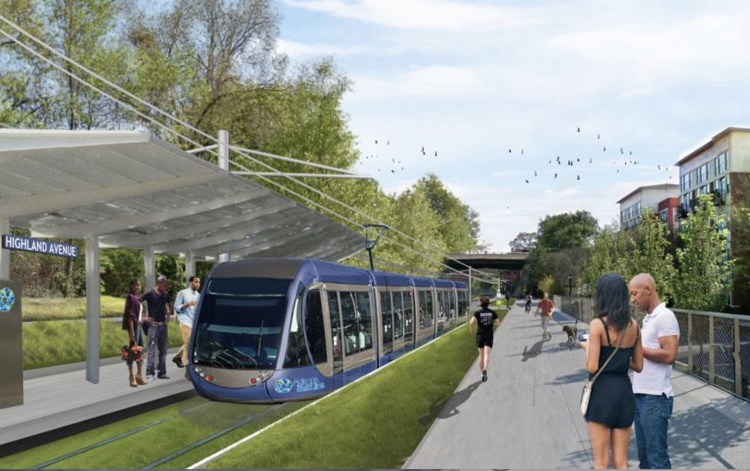 The current rate of transit development along the Atlanta BeltLine will result in decades passing before the vision this rendering presents to Atlanta taxpayers is close to being fulfilled. Credit: Sixpitch

You’d think if Atlanta leaders had a way to extend reliable rapid transit to dozens of neighborhoods, connecting them to existing MARTA rail at multiple points – and do it relatively cheaply – they’d jump at the chance. 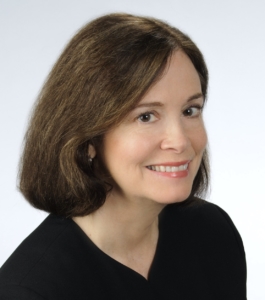 Yet MARTA and the city of Atlanta are shoving that project to the back of the line. Instead, they’re prioritizing more expensive, less effective, ways of getting people around an increasingly traffic-choked metro core, while putting off a solution already years in the making and is one that citizens want.

Maybe you’ve heard about it. It’s called the Atlanta BeltLine, and we’ve been talking about it for 20 years now. It runs through more than 40 neighborhoods on a right-of-way separated from stop-and-go traffic. Like a wheel and spokes, it crosses MARTA’s existing rail lines at multiple points and intersects more than 30 bus lines.

Transit has been central to the BeltLine since Ryan Gravel first delivered his thesis to city leaders in 1999, and transit is the reason city leaders took it up. “It was the thing that made the BeltLine for everyone,” says Gravel. It is transit connectivity that makes the BeltLine so transformative – it’s not just about jogging paths and shiny new buildings, it’s about stitching over 40 neighborhoods together.

Putting new rail on a corridor of abandoned and out-of-use rail will boost mobility inexpensively in a city in desperately need of a bypass for its clogged arteries. That vision is why the city of Atlanta created the BeltLine Tax Allocation District in 2005 to provide funding for revitalizing 22-miles of historic railroad corridors circling downtown. Progress on the other BeltLine goals of parks and trails, and some measure of affordable housing, has been made – with no progress on transit. However, there is a legal obligation created with the TAD bond instruments that the entirety of the Beltline, including transit, be completed by 2030. 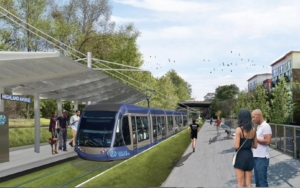 The current rate of transit development along the Atlanta BeltLine will result in more than two decades passing before the vision this rendering presents to Atlanta taxpayers is close to being fulfilled. Credit: Sixpitch

City leaders realized that the TAD was not enough money for BeltLine transit, so in 2016 citizens were asked to approve another source of revenue for the transit component via a ballot initiative. The BeltLine rail was the top transit project presented when Atlanta residents voted by a margin of nearly 3-to-1 to support a 1/2-percent sales tax increase for more transit.

What does the downtown streetcar loop have to do with the BeltLine? Before the 2016 vote, citizens were told by MARTA that no part of the sales tax would go to support the empty downtown streetcars, which citizens don’t like. Three years later, the opposite has happened: In the plan MARTA approved in June, the No. 1 priority is extending the downtown streetcar route out to Ponce City Market. When you hear officials talking about how “BeltLine” rail is coming in the next decade, that’s what they’re talking about – less than a mile and a half of transit along the Eastside Trail tacked onto more mixed-traffic streetcar.

No wonder that city leaders hid the truth: The streetcar runs largely empty, gets stuck behind errantly parked cars and doesn’t work when big crowds flock downtown – the very moment when transit is needed most. It’s a punching bag for opponents of transit, and a punch line for everyone else. 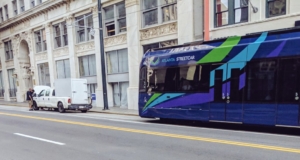 The fixed-rail Atlanta Streetcar operates at the mercy of any vehicle parked, or in this case stalled, in its path. Credit: Darin Givens

BeltLine rail would do more than any other transit project to provide mobility to underserved communities. Yet, under current plans, Ponce City Market would also be the destination for a second big-ticket, high-priority project – a bus rapid transit line along North Avenue. While Ponce City Market is an excellent redevelopment and we love its connection to the BeltLine, transit-dependent neighborhoods in Atlanta lie along the southern edge of the BeltLine corridor, not along North Ave.

Even more scandalous is the priority given to the Clifton Corridor spur to Emory University. Beyond the dubious way Emory was shoehorned into Atlanta after the transit vote, in order to take advantage of tax revenues from the 2016 tax referendum, the bulk of this wealthy area’s workforce comes from north DeKalb and Gwinnett counties. It’s a regional project that needs multijurisdictional support, which it currently lacks, while doing little for Atlanta commuters. And with no right-of-way acquired or required federal studies approved, it’s the opposite of shovel-ready. 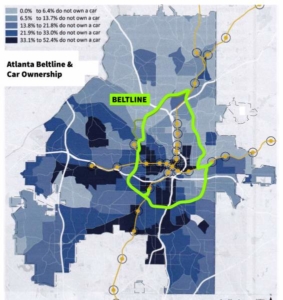 By comparison, most of the BeltLine corridor is already in public hands. And since the corridor is using abandoned and out-of-use rail beds, there will be no traffic congestion such as the Atlanta streetcar experiences. The BeltLine has gone through more extensive environmental and engineering studies than any other rail project on the list. And at an estimated $55 million a mile, it’s far more cost effective than a streetcar extension ($75 million per mile) or the Clifton Corridor ($200 million per mile).

City leaders proceed with the current transit construction timeline at their own risk: Legal action against City of Atlanta for not fulfilling the obligations of the BeltLine TAD, as well as promises made to citizens leading up to the 2016 transit sales tax referendum, is under review. And there certainly won’t be public goodwill for future requests for self-taxing projects if BeltLine rail isn’t a priority now.

Note to readers: Patty Durand and Matthew Rao serve as co-chairs of BeltLine Rail Now, a non-profit citizen action group advocating for the rail portion of the Atlanta BeltLine. BRN is organizing a march on Oct. 6, starting at 2 p.m. at the Old 4th Ward skatepark, located on the BeltLine’s Eastside trail. For more information, email BRN at info@beltlinerailnow.org 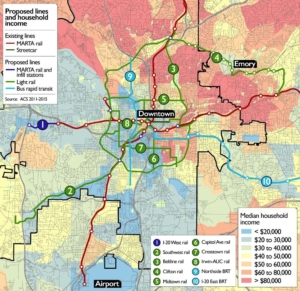