It’s amazing to witness the moment when a plan is no longer just a plan but a living document that is part of a community’s lifeblood.

That’s exactly what is happening in Southeast Atlanta with the 19-acre site on Glenwood Avenue — a pivotal piece of property that is pitting a traditional retail developer’s vision of the future with the vision that hundreds, if not thousands, of Atlantans have for how we should develop along the BeltLine corridor.

In the late 1990s, citizens in Midtown Atlanta showed their power when they killed plans for a parking garage at 10th and Peachtree streets (but more on that later).

For the past decade, we’ve been hearing and talking about how the Atlanta BeltLine will transform our city — how it will change our lifestyle from being auto-centric to one that is pedestrian- and bicycle-friendly with a mix of housing, retail and work spaces.

So when developer Jeff Fuqua of the Fuqua Development group proposed a project for a “big box” retailer with up to 1,200 parking spaces and no residences, the surrounding neighborhoods cried foul. 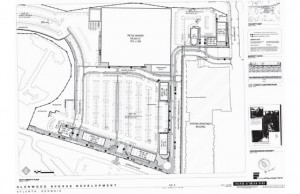 Last week, more than 600 people — almost all in opposition to the Fuqua project — showed up at the Zoning Review Board. Even the organizers were surprised by the turnout.

But that’s what happens when a vision — in this case the BeltLine sub-area 4 master plan — becomes an ingrained element of the community.

The master plan calls for a vastly different kind of development — multi-story residential buildings with retail on the first floor with a network of streets and sidewalks that will tie the communities of Grant Park and Glenwood Park together.

As it turned out, the Zoning Review Board sided with the neighborhoods and changed the zoning classification from industrial (which would have permitted a large-scale retailer) to high-density residential with some commercial development.

But the neighborhoods also are working another legal angle.

The city’s Office of Planning already had granted a special administrative permit allowing Fuqua to develop his project. 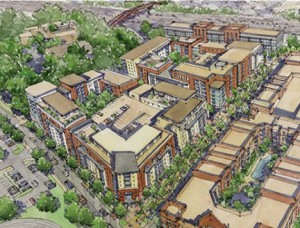 The adjacent neighborhoods, led by the Grant Park Neighborhood Association, are appealing that decision.

“Our opinion is that they made a mistake,” said David Marmins, an attorney with the Arnall Golden Gregory law firm, who is representing the neighborhoods. “What is very important to understand is that the city’s code states that the BeltLine overlay trumps the zoning whenever there’s a variance.”

The BeltLine master plan has a zoning overlay to determine how the corridor should be developed.

The community’s appeal of the special administrative permit will be heard at the Oct. 10th meeting of the Board of Zoning Adjustment at noon. No matter what happens with either the ZRB or BZA decisions, it is expected that the zoning issues surrounding this development will be fought in the courts for months to come.

But it will be an uphill fight for the developer because he will be swimming against the tide of public opinion, which is calling for a new way to develop our city — especially in our close-in neighborhoods.

This past Saturday, a group of neighborhood leaders were meeting in a comfortable home on a dead end street in Grant Park just blocks away from where the Fuqua development is supposed to be built.

Lauren Rocereta, president of the Grant Park Neighborhood Association; Rick Hudson, land-use and zoning chair for the same association; and Ana Allain, president of SAND — South Atlantans for Neighborhood Development — that includes five communities; gathered in the living room to discuss their successes and their upcoming battles.

They have been participating in planning efforts for the BeltLine and their communities for years, and they have a clear vision of how they would like to see the area developed.

That vision does not include 1,200 surface parking spaces and big box retail.  But it does include tree-lined streets with new residences that will connect their communities that have been separated by a rail line and industrial uses for decades.

Simply put, that is the vision of the BeltLine — to reconnect our city and our communities.

Midtown found out how powerful a community vision can be 15 years ago.

In 1997, it hired urban planner Anton Nelessen to launch a visioning process for the community. Thousands of people participated in a vision of what they wanted their community to be — and Blueprint Midtown was born.

But in January 1998, First Union announced plans to raze all the buildings and put up a parking garage between 10th and 11th streets along Peachtree. Immediately the bank’s Georgia president was inundated with hundreds of angry calls and even angry employees who said a garage was not in sync with the community’s vision for Midtown. It took First Union less than two weeks to abandon its plans for a garage.