Construction started Wednesday on a replacement bridge above the Atlanta BeltLine, one that is to improve safety for users of the bridge and to provide better access to the Eastside Trail and the BeltLine’s proposed transit line. 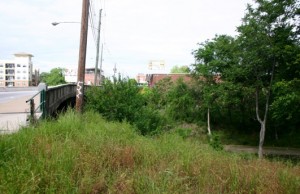 The Edgewood Avenue bridge over the Atlanta BeltLine is being replaced with one that will improve access to the Eastside Trail. Credit: BeltLine.org

The $4.5 million, yearlong project was delayed from a planned start date of March 18. The cause was utility work that had to be done before crews started to demolish the existing bridge.

As with many public construction efforts in Atlanta, this one is presented as a BeltLine project. Atlanta BeltLine, Inc. is involved and funding comes from a federal program that provides bonds for projects in economically distressed areas, which were provided in the American Recovery and Reinvestment Act of 2009.

The Edgewood Avenue bridge was built in 1906 over tracks of the Southern Railway. Southern once was a multi-state player that itself was created in 1894 through the assemblage of distressed railroad companies, according to its historical association.

The replacement bridge is designed to provide new pedestrian connections to the BeltLine’s Eastside Trail. The bridge also is to provide an option that would enable the Atlanta Streetcar to get to the BeltLine corridor to provide transit service.

The Eastside Trail opened last autumn and has proven to be a widely acclaimed multi-use trail and linear park that connects a tip of Piedmont Park with the Old Fourth Ward and Inman Park. This trail is the first section to open in the out-of-use rail corridor that’s the core of the city’s BeltLine project.

The existing bridge is either functionally obsolete or structurally deficient, according to the “State of the City’s Infrastructure” report issued in December 2008.

According to the report, the Edgewood Avenue bridge was one of eight bridges in Atlanta that were ranked as No. 1 priority projects. That’s because each had a safety rating of 30 or below, according to safety ratings issued by the Georgia Department of Transportation.

A rating below 50 makes a bridge a candidate for replacement, according to the report.

Edgewood is a busy road that links downtown Atlanta with neighborhoods to the east. It continues toward Decatur, changing names to McLendon Avenue and providing an alternative to DeKalb Avenue until it basically ends in Lake Claire.

The busy nature of Edgewood is, evidently, one reason the city is emphasizing that all businesses will remain open and accessible during the construction work. Some shopkeepers along the construction route of the Atlanta Streetcar have complained persistently that patrons either can’t see that their shops are open, or cannot get to the shops easily.

When asked about the complaints last summer by Councilmember C.T. Martin, Richard Mendoza, Atlanta’s commissioner of public works, said the city was doing all it could to protect access and promote the businesses – including buying meals at restaurants when there was a chance to hold a lunch meeting in the area.

The affected area of Edgewood Avenue is between Randolph and Krog streets. Detour routes will use Irwin Street and DeKalb Avenue. Some residents had complained about the detour routes at community meetings in August 2012, according to a report in eastatlantapatch.com. Those routes are the ones in place.