Several leaders in Atlanta’s beauty industry are turning their attention to helping the homeless and will start with an event Sunday.

“If I want to apply for a job and my hair is terrible, what do I do?” was the question posed by Jakki Dee, a longtime fixture in Atlanta’s beauty industry and owner a Buckhead salon. 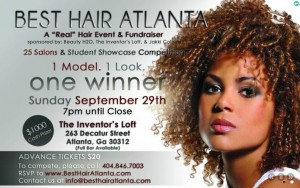 Top stylists and students will face off in the “Best Hair in Atlanta” contest to raise money for services for the homeless. Credit: besthairatlanta.com

Dee’s answer was to spearhead a fundraising event that he hopes will lead to the opening of a salon where the homeless can get free hair care. Among the 25 participating salons are Van Michael and Richie Arpino – two leaders in Atlanta’s vibrant cosmetology industry.

The event Sunday will feature licensed stylists and students competing on stage for a $1,000 cash prize in a contest that’s headlined, “One Model. One Look. One winner.” Contestants paid a $100 entrance fee to display their talents grooming hair and they’ll work only on real hair – no wigs or weaves.

Proceeds are to benefit Salon Harmony, which Dee hopes will be the future salon in downtown Atlanta to provide free grooming services to the homeless. Salon Harmony is affiliated with Sconiers Homeless Prevention Organization, Inc., which is listed as a non-profit with the Georgia Secretary of State.

An additional goal of the salon is to help homeless persons realize that jobs in the cosmetology industry could be their pathway out of homelessness, said Dee, who owns Jakki Colours Salon/Jakki Colours Hair Replacement, on Piedmont Road.

“We’re going to train homeless individuals who would like to train in our field to become providers,” Dee said. “They could run a salon, work in a salon, and come back into main society by being to finance themselves. Salon Harmony would be an opportunity for self esteem, to be lifted, and identify a possible career.” 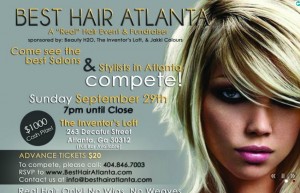 Proceeds of the event are to help open a salon in downtown Atlanta where homeless individuals can receive free grooming and learn about jobs in the cosmetology industry. Credit: besthairatlanta.com

Metro Atlanta has a long history of organizations that seek to help the homeless. Some are at the vortex of the debate over homelessness, such as the Metro Atlanta Task Force for the Homeless. Others operate out of the public spotlight.

Faith-based and non-profit groups provide meals and counseling. Atlanta’s city government has taken steps to take over the Gateway Center, which was designed to be a “gateway” to the continuum of care that can help individuals move out of homelessness. Gateway previously was a joint effort of Atlanta, DeKalb and Fulton counties.

Now is the time for the beauty industry to step to the plate, Dee said.

“We have 5,000 beauty salons and 1,800 barberships, so our community is big enough and strong enough to make this happen,” Dee said. “This is our first fundraiser and the Braves have stepped up, the Atlanta Urban League got involved. We think it’s a fantastic opportunity for the community to salute the homeless and show them we care.”

Dee rattled out the kinds of statistics that are so well known in the region’s discussion of the homeless. Without going into the specifics Dee cited, he noted the high proportion of military veterans who are homeless, the number of women and children, the fact that not all the homeless prefer to live on the streets or in shelters.

Dee said he was homeless for a time. He wasn’t on the street, because he slept in his salon. But the experience was eye opening for the Marine vet.

“Now that I’m on my feet, I want to take the opportunity to make sure that other people have the same opportunity,” Dee said. “We can do this, because we have the wherewithal.”