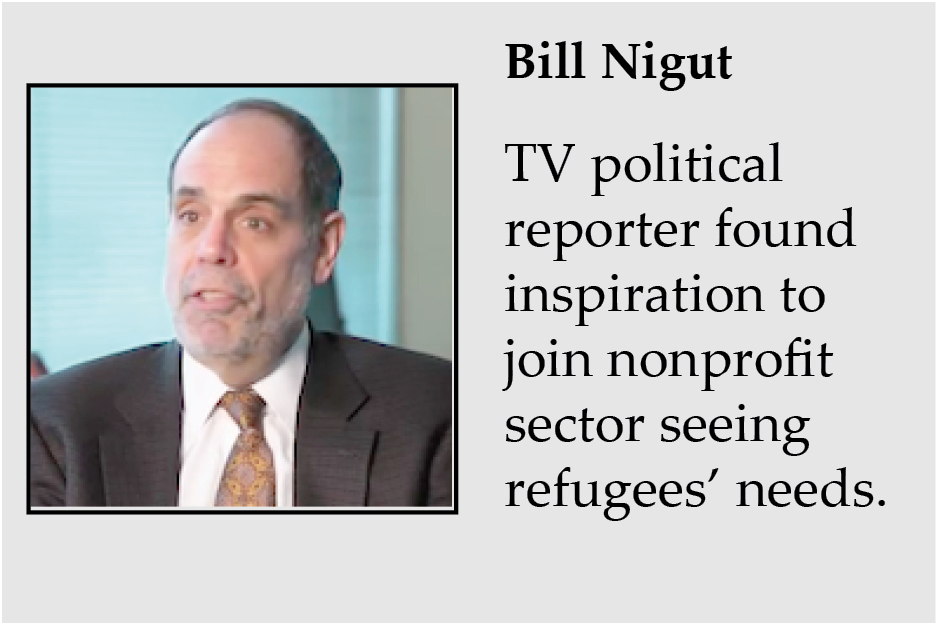 For more than 20 years, Bill Nigut was a mainstay of Atlanta’s WSB-TV’s political coverage and it looked like he would end his career there – until the day in 2002 when he walked into a non-profit taking care of international refugees in Clarkston. That was the Moment that changed his life.

As a reporter, Bill covered local and state politics, leading the station’s reporting on five presidential campaigns, including the time he brought President H.W. Bush and then-governor Bill Clinton to Atlanta for a town hall meeting. President Clinton later joked with him that Bill had more appearances than the future president did in the movie “The War Room,” which provided an in-depth behind-the-scenes view of the 1992 Clinton campaign.

Pretty heady stuff, yet his view of his own importance changed when he was accepted into Leadership Atlanta, the oldest sustained community leadership program in the nation that strives to connect and inspire leaders to strengthen Metro Atlanta’s communities.

“The Moment that really changed my life was In the midst of my year in Leadership Atlanta in 2002,” Bill said. “We were on our community day and my smaller group went to Clarkston and we got to see the nonprofit organizations that were working with the extraordinary refugee community that’s now living out there. Their needs are so great and their problems are so many and I saw the way in which nonprofits were helping them live living better lives.

“I went back to my office at Channel 2 News where I’d spent 20 years as a political reporter and said, ‘Compared to what those people are doing in Clarkston, all I do is blab on television every day. I really need to make a change. I need to get across the wall that separates reporters who are observers from the leaders who are making a real difference in our community.’ ”

In the early 1990′s, Clarkston became ground zero for processing and caring for refugees entering the U.S. Five miles east of Decatur and five miles west of Stone Mountain, the town has more than 150 ethnic groups living in the city and the Friends of Refugees has helped process approximately 60,000 refugees, many of whom have been resettled in the area. Clarkston was cited as one of the most diverse areas in the nation in a 2007 article in the New York Times.

At the time of his visit, Bill was serving on a task force to help establish a community-based organization “to make the Atlanta region a premier center for the arts – and be recognized as such.” Its mission was to find new funding support for the arts and as the group started to form the Metro Atlanta Arts and Culture Coalition, Bill retired from WSB and became the group’s first executive director. For three years, he led the organization that advocates and builds community support for new sources of funding.

Then five years ago, the Anti-Defamation League approached Bill about being director of its Southeast division. That group was founded in 1913 to fight anti-Semitism, but found its calling during the infamous Atlanta trial and ultimate lynching of Leo Frank in Marietta in 1915. Today the organization has 30 offices in the U.S. and abroad and has expanded its focus to fight all forms of bigotry.

“In the five years since then, I’ve been one of the most fortunate guys in town,” Bill said. “Because I come in every morning and know that the chances are good I’m going to get to fight hatred and bigotry against Muslims, against Jews, against African-Americans, against Hispanics, the LGBT community. We deal with those issues in a real way every day so I feel that I am finally getting the chance that I’ve wanted for a very long time to truly make an impact on the community in which I live.”

Note to readers: Since this Moments first ran in 2012, Bill Nigut has announced that he will be joining Georgia Public Broadcasting on Nov. 20, 2013 as senior executive producer of a television program that will begin airing in January 2014.