A New Jersey-based company involved in the high stakes world of biopharmaceutical research has just expanded an important subsidiary in Norcross – a blood plasma collection center. 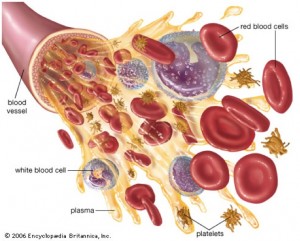 ADMA is trying to develop a product from dissolved substances in human plasma, the fluid that’s made up of 90 percent water and serves purposes including the transport of nutrients to, and waste products from, tissue. Credit: Encyclopaedia Britannica via mysciencevirtualclass.blogspot.com.

The parent company conducts research with plasma. If the research is successful, the resulting product could help countless suffers of chronic diseases and provide enormous revenues to ADMA Biologics, Inc.

The expansion of ADMA BioCenters, in Norcross, represents another step in the growth of metro Atlanta’s bioscience industry. The region’s economic developers are focused on bringing bioscience and health IT businesses to the corridor that connects Atlanta’s airport and Athens.

This industry isn’t for the faint of heart.

ADMA states in its federal filings that it has accumulated a deficit of $52.6 million in the past decade. Profits, if they ever materialize, will come only at the end of a long period of risk.

ADMA’s filing with the Securities and Exchange Commission observes:

Nonetheless, company officials gathered in Norcross on Sept. 4 with local government and business leaders to cut the ribbon on an expansion of ADMA’s subsidiary, ADMA BioCenters. The facility is located at 6290 Jimmy Carter Boulevard.

The 15,000-square-foot expansion represents a $1.5 million investment. The expansion is expected to create 20 jobs and enable more donors to sell their plasma for prices up to $50 a donation, according to Gwinnett Chamber of Commerce.

ADMA BioCenters has a web site that says donors can earn up to $250 a month by selling plasma. The site offers a coupon worth an extra $5 on the first donation.

The plasma collected in Norcross serves two purposes – ADMA uses what it needs to conduct its research, and ADMA sells its surplus supply to buyers in the U.S. and Europe, according to the company’s SEC filing.

Facilities such as the one in Norcross can collect from 30,000 to 50,000 liters of plasma every year, according to ADMA’s filing with the SEC.

ADMA is seeking to develop an injectable immune globulin that it has named RI-002. The product is derived from human plasma and is to be processed in proprietary manner that is expected to command a premium price, compared to competitors, according to the SEC filing.

The targeted patients have immune deficiencies that are either genetic or the result of being suppressed for medical reasons, according to the SEC filing. The disease is known as primary immune deficiency disease, or PIDD. 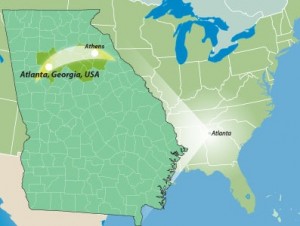 The Innovation Crescent is an effort by 15 counties between Atlanta’s airport and Athens. Credit: new.georgiainnovationcrescent.com

PIDD manifests some of the following conditions, according to the American Academy of Allergy, Asthma & Immunology:

The number of individuals who suffer from the disease isn’t known, but it’s thought to affect one person out of every 1,200, according to the Immune Deficiency Foundation.

The market for plasma-based therapies is $5 billion in the U.S. and $15 billion worldwide, according to ADMA’s filing with the SEC.

In a related development, the state broke ground in April on a training facility near Covington. The center is to provide training for future employees of bioscience industries that may be recruited to the state. The Georgia BioScience Training Center is to be operated by Georgia’s Technical College System.

The training center is located across from the site where Baxter International intends to open a $1 billion facility that’s to produce plasma-based therapies. The plant’s workforce is expected to reach 1,500 employees after it opens in 2018.