Scarlett Johansson isn’t very happy with how things have turned out for her new movie, “Black Widow” and neither am I.

Her dissatisfaction, expressed in a lawsuit, has to do with Disney’s decision to release her film simultaneously in theaters and on Disney+.

My problem is, “Black Widow” isn’t much good. 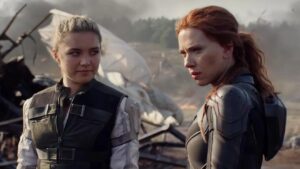 It’s hard to say what I was expecting but given how well Brie Larson did as Captain Marvel, I think I was hoping that Johansson’s titular outing as a Russian super-agent would be another encouraging moment for female characters in the MCU (Marvel Comic Universe).

Instead, the picture is one of those comic-book movie conundrums: simultaneously over-active and inert.

The set-up is sort of nifty. We first meet Natasha Romanoff (aka, Black Widow) in 1995, as part of a sleeper-cell family of Russian spies embedded in suburbia (Rachel Weisz is the faux-apple-pie mom and David Harbor is the semi-bumbling dad). But the authorities are onto them and this supposedly idyllic family (turns out nobody is really related) is forcibly broken up. 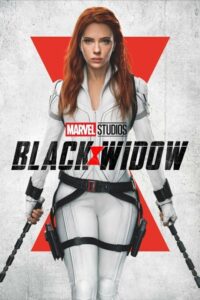 Jump ahead a couple of decades and Natasha reunites with her “little sister,” Yelena (Florence Pugh). It turns out that both were separated from their supposed parents and enrolled in an elite training program for female assassins run by a Russkie bad guy called Dreykov (Ray Winstone).

Yelena has developed an antidote to Dreykov’s brainwashing technology.  But for it to work, a family reunion must take place. Or something like that.

What’s best about “Black Widow” is the relationship between Johansson and Pugh. Both know this stuff isn’t exactly Shakespeare – heck, it isn’t even “Iron Man” – but they commit to the material. Even when the script goes Roger-Moore-as-007 goofy, they play it reasonably straight and let their considerable talent – and charisma – carry the day.

A re-teaming of these two would be welcome, but given Johansson’s lawsuit and Hollywood’s, um, aversion to more than one female protagonist in most movies, I’d say keep your eye on Pugh. About all she needs for a sequel all her own is a decent superhero name. Sis Gender anyone?

“Black Widow” is now showing in movie theaters, and it is available for viewing on Video on Demand.