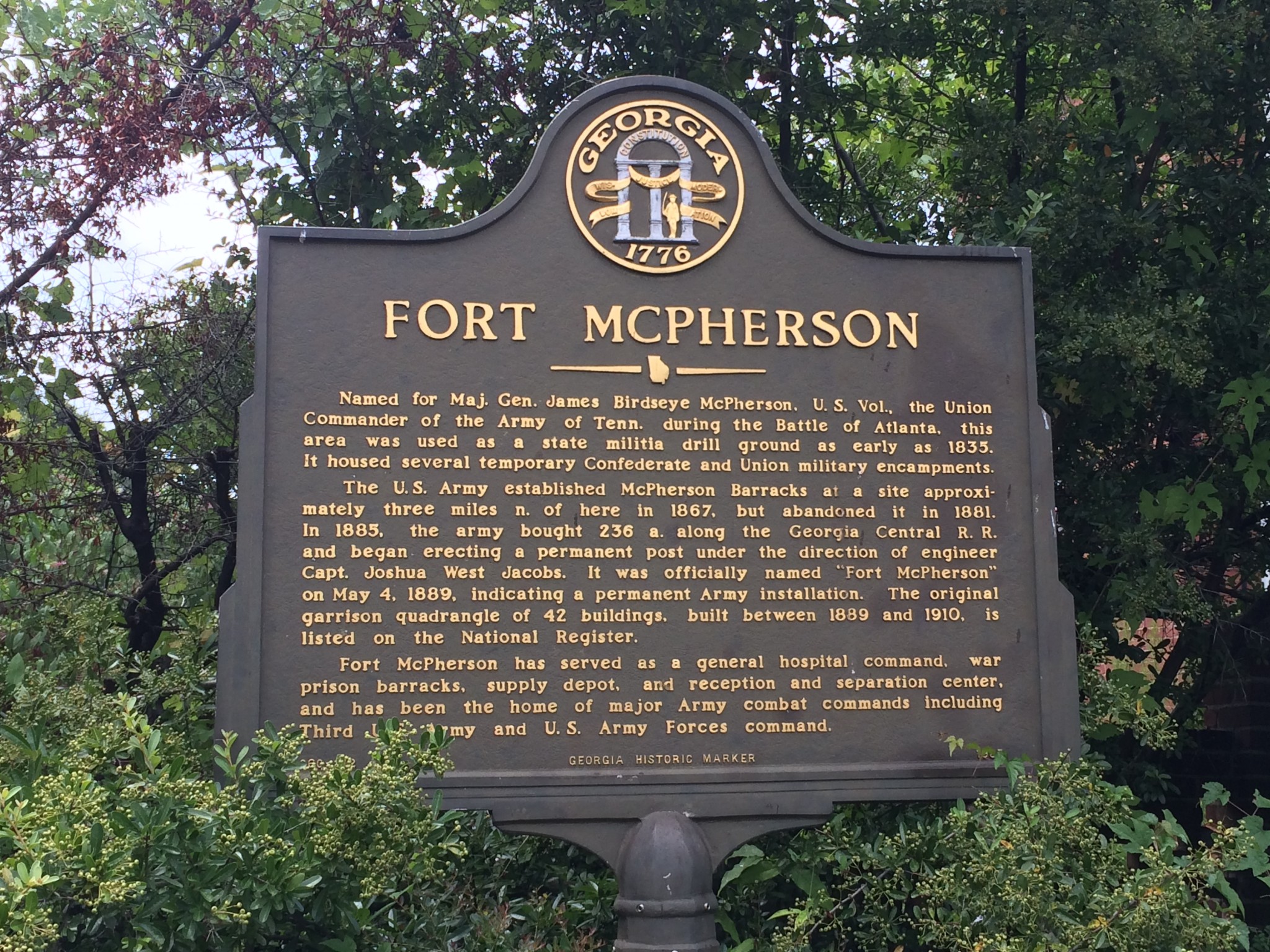 According to this historic marker, Fort McPherson predates Atlanta and was established shortly after the Campbellton community was formed to the west of the military post. File/Credit: Donita Pendered

The board overseeing the redevelopment of Fort McPherson offered an olive branch to the residents of the adjacent community Monday. The reception was chilly, at best. 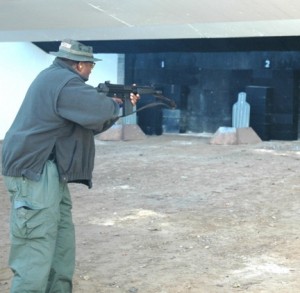 A state authority has scarcely mentioned the status of environmental remediation at Fort McPherson, though it will affect Tyler Perry’s planned payment schedule. Here, Clayton County Sheriff’s Capt. David A. Bell, an instructor of special weapons and tactics, practiced at Fort McPherson in 2008 with a .40-caliber Glock pistol. Credit: army.mil

“What is being done really doesn’t pass the smell test,” said West End resident Kay Wallace. “Come on, guys. We deserve better and you’ve got to give us better.”

One issue that was barely mentioned in a long-awaited presentation on the pending deal to sell most of the fort to filmmaker Tyler Perry is the status of fort’s environmental clean-up. A portion of Perry’s payments will be collected based on when the Army remediates the property and turns it over for civilian use, according to a lawyer for the board.

Wallace’s comment was a representative response after the board’s 80-minute presentation on the subject of how Perry has come to be the prospective buyer of most of Fort McPherson – 325 acres for $30 million.

Some residents have complained loudly that the fate of the fort is too significant for their southwest Atlanta neighborhood to be negotiated behind closed doors. For example, the deal with Perry began in February, but became public only when Atlanta Mayor Kasim Reed announced it in June.

Felker Ward promised at the outset of Monday’s meeting that the board intended to be as transparent as possible in describing the tentative land deal. Ward chairs the board of the McPherson Implementing Redevelopment Authority, which was created by the state to oversee the fort’s conversion to civilian use.

“I think you’ll appreciate the visibility this will give you,” Ward said. “You’ll understand what is driving our decisions.”

The closest the MILRA board came to mentioning the remediation issue involved the timing of Perry’s payments for property. Some residents have questioned whether Perry’s planned studio’s can be built under the terms of an environmental impact statement prepared for a previous redevelopment plan.

The Army will turn over portions of the property at various times in the future, following the completion of environmental remediation. As Perry receives those portions, MILRA will tap a $10 million letter of credit Perry is to provide, according to Ken Neighbors, a lawyer working on MILRA’s behalf. 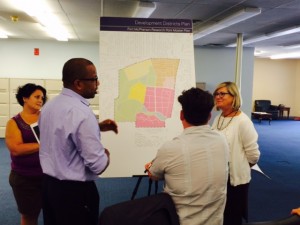 Incidentally, the military initially estimated the cost of environmental restoration would be $8.9 million. By 2003, $11.1 million had been spent, according to the latest report available online from the Department of Defense.

More than 200 chemicals are associated with military munitions, including lead, trinitrotoluene (TNT) and perchlorate, which the Government Accounting Office has stated, “may cause various health effects, including cancer.” Fort McPherson had four operational ranges and two small arms ranges, according to a DOD report.

Ward led a presentation that resembled an executive summary of the legal steps taken to enable the state to buy the fort from the Army. The goal was to get the property at a cost lower than the market value. Other mechanics of the transfer of property from the Army to the state were outlined.

Before Monday, the board had insisted to residents that it could not reveal details of the proposed transaction with Perry. Georgia law does provide governments with considerable leeway in conducting real estate transactions in private, for the purpose of preventing speculators from jumping into a deal and driving up prices to be paid by taxpayers.

“I know there’s been some frustration on your part, that we’ve not been able to open up all those details,” Ward said. “I can assure you we’d never get there if we had to do [the transaction in public]. On one hand, we were negotiating with the Army to buy and set up a payment schedule, and simultaneously deal with Tyler Perry.”

As Ward wrapped up the board’s presentation, he said:

“Our intent is to answer a whole lot of questions. You now know just about all that we know. You’ve heard both sides of the transaction, what they consist of, and a time frame.”

Ward concluded by saying the board’s next meeting, on Sept. 16, is to convene at 6 p.m. Some residents have asked that MILRA meet at night so that people who work during the day have an opportunity to attend. In addition, the board will host a reception at the meeting to recognize Sprott, who was MILRA’s first executive director.